So I’m classing this as my first proper 70.3 as a Pro, and with a 4th place finish I’m pretty happy. The big positives are that I felt like I stuck to the plan and took some huge learning away from the race, and even bigger positives, that I know there is still a lot more in the tank and a lot more to come. Having now been with Matt Dixon and the Purplepatch crew for 6 weeks, I’m feeling fitter and stronger every day. It’s a huge learning curve but I’m absolutely loving it and trying to soak up as much as I can, perfecting my sponge impressions! 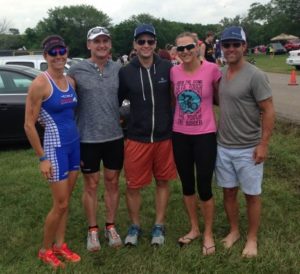 The Purplepatch Team at Kansas 70.3

There is certainly no “I” in triathlon here, and I’ve been inspired by the awesome camaraderie in the squad and by the incredible support network that has welcomed me to San Francisco. The people I get to train with daily in Purplepatch and the Every Man Jack Team, the amazing hospitality and generosity of my home stay Jordan and Rich, being able to work with the team at Foundry Performance (www.foundryperformance.com) for my strength and mobility, working with the best Nutritionists and Technical Bike guru’s! Whilst on race day it’s just me on the swim, bike and run, behind this is an amazing team getting me to that start line and helping me the very best I can and for that I am forever grateful.

So with my red shoes packed and off in search of Dorothy, Toto, The Tin Man, The Scarecrow, the Lion and The Yellow Brick Road (and yes I’m going to try and get as many clichés in here as possible), I was heading to Kansas. Kansas, is somewhere over the rainbow, in the middle of the USA, located equivalent distance from the Pacific and Atlantic Oceans. It’s also Tornado season. Awesome! I’ve left the earthquake zone and arrived in the Tornado region!

First things first….”Toto, I don’t think we’re in Kansas anymore…” or rather “Sid, we’re not in Australia anymore” and therefore when travelling domestically in America, your Australian drivers license is not necessarily going to cut it! Please ensure you remember to take your passport next time! However what was a huge improvement for this journey was my new Scicon bike bag. It’s ridiculously easy to pack your bike in these bags, reducing the stress of travelling with a bike for sure.

We were incredibly lucky come race day to have pretty near perfect conditions. Once again everyone keeps telling me “this isn’t normal for “insert current city” “, be it San Fran or Kansas. In the days leading up to the race the weather had been a bit mixed, even thick fog (which made for a fun and interesting swim session in the lake. Ok I’m going to digress. Friday morning and I joined a small group who swim in the lake near where I was staying. The group, swim from one boat mooring to the other which is at the opposite end of the lake. Friday morning was thick fog and you could barely see 10m ahead.

This was the fog that greeted us for a morning lake swim. Yep visibility….lacking.

We set off swimming to the far end of the lake, blindly in the direction we thought. I ensured I stuck to the side of one of the guys. Whilst not really knowing if we were heading in the right direction or not, we did in fact make it to the boats at the other end where we turned round and headed back to the start. On arriving back at the start, we met one of the other guys from the group. He was a slower swimmer so we assumed he’d just swam part way and turned round and come back. Nope. He’d actually thought he’d swam to the boats at the other end of the lake, only to find that in the fog he’d ended up swimming in a complete circle and ended up where he started!) Oh yes and this was all after they told me there were snakes in the lake!

Back to the race and the weather. On race day temperatures were unusually low, wind was not really existence and the sky had light cloud cover. This meant it was going to be a fast day. The course at Kansas is a split transition, with a simple anti-clockwise rectangular lake swim, a rolling bike course (don’t be fooled it’s definitely not flat) and then a 2 lap flat (just one small hill per lap), but winding run course through the campsite.

The lake was perfect. Calm, flat, it couldn’t have been better. Needless to say when the cannon fired I soon found myself in my usual position of no mans land. Swimming is definitely my long-term project, and whilst I’m staying patient with this process as we’ve been making some changes, I still found myself not able to stay with the front pack. This will come I know. I came out the water in 9th, only 4 bikes left on the rack. However as I set out from T1, I was pleased to see a line of 4 girls not too far ahead and by mile 5 I’d passed them all. I’d also been passed, at an incredible pace, by Ruth Brennan Morray, who’d exited the swim just behind me. The chase was now on.

Out on the bike course.
Photo thanks to Randy Sadler

The bike course was awesome. A series of rolling hills, some bigger, some smaller, some bigger. It was a one lap course with some out and back sections and some sections where the route back was different from the way out. I loved it. I was now in 5th and could see the girls up ahead. I was surprised when we came to the first turnaround (20miles approx..) to see Amanda Stevens (easily spotted on her lovely white Boardman Air/TT) and Rachel Joyce not too far ahead and I continued with my head down to try and close the gap further. The rollers and a few turns in the course made it deceptive though. Up the hills, it made you think you were catching up with the guys in front, only to reach the crest and see a tiny speck in the distance as they had descended into the distance or turned a corner! At 50miles I made progress again and managed to close the gap on 4th, ensuring we pretty much arrived in T2 together. Exiting T2 onto the run and three of us were together, Amanda Stevens, followed by Lauren Barnett followed by me about 20m back. Lauren made quick work or passing Amanda, and slowly inched away and over the first 2miles I made my way into 4th.

On the run with Amanda Stevens.
Photo thanks to Randy Sadler

The two-lap run gave plenty of opportunity to see the girls ahead and behind and also other friends racing as well. I felt strong on the run, and felt I kept focus whilst also soaking in the atmosphere from the awesome volunteers and supporters lining the course. Part of the lap weaved it’s way through the campsite which was brilliant with all the support out there. I always get a buzz and feed off the energy the supporters and volunteers put into clapping, cheering, ringing cow bells or whatever, so I have to say a huge thank you to everyone that was out there. I’m sure that means I have far too much energy though and I’m not running hard enough!

I crossed the line in 4th, happy with the solid performance and that I’m moving in the right direction, knowing there’s a lot more to come and having loved the race. Congratulations to Ruth Brennon Morray who’s wicked bike/run combo gave her a deserved win. Also to Rachel Joyce and Lauran Barnet for rounding out the podium, but to all the Pro women, it was great to race with you all. Thank you.

However I was massively disappointed not to have the full cast and characters from The Wizard of Oz at the finish line! I thought this was the only reason we did this race? I’d heard so much about it and seen the pictures and I was excited to grab my own photo with the stars, but this year they were obviously still in Oz.

Another big thank you for making my Kansas trip just so easy and a lot of fun is to the fabulous Malfer family, who were my homestay for the race. An awesome family who looked after me and couldn’t have made me more welcome. 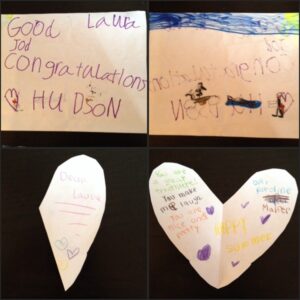 The pictures and cards from Hudson (6) and Karoline (9) Malfer, that greeted me after my race.
Awesome!

They even made S’mores post race! These are definitely becoming my favorite snack and I think will be a post race habit! I am definitely being spoilt with my homestays in the USA so far and the standard is being set very high!

S’mores!
I think these have become my post race favourite snack! soooo good!

Last but in no ways least, a thank you to the rest of the parts that make this team. Jaggad (I’m getting so many compliments on the kit, time to go global I think), Huub (aXena wetsuit and goggles), Shotz (www.shotz1.com) Nutrition for keeping me energized and hydrated throughout, Oakley (Radar Locks), Kask (Bambino helmet), Inov8 (Tri-X-treme Tri shoes) and of course Matt Dixon (www.purplepatchfitness.com) for giving me this chance. After only 6 weeks, I’m a little excited about learning and developing further over the next few years.

Into the Wild….Wildflower Race Report