Bonjour! Ok so that’s about as far as my French goes, without the risk of saying something unintentionally insulting. I’ve just spent the past week in Mont Tremblant, Quebec and wished I’d been able to remember more of my GCSE French! (To any kids reading this…pay attention in your language class!) 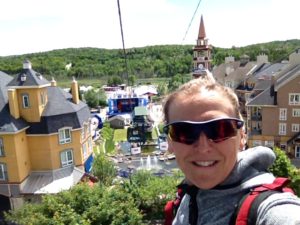 Mont Tremblant is home to the 2014 Ironman 70.3 World Championships, to be held in September. For the last 3 years Las Vegas has been home to these Championships, but now they move to Canada, and, it’s going to be epic!

This year Mont Tremblant has already hosted a 5150 race, the 70.3 last weekend, will hold an Ironman in August and then the World Championships in September and I can say the town has embraced everything about Triathlon and making the events a success. They are incredibly welcoming to all athletes.

So to tie in with the race and a bit of recon for the Worlds in September, the Purplepatch team headed up to Mont Tremblant for a week of training, with the race being at the end of the week. It was my first PurplePatch camp and I guess it was to be a little different from normal camps with it leading into a race, but it was great to meet some of the other PurplePatchers and to have a fully focused training camp. I was sharing an apartment with Trithlon pin up/calendar boy Jessie Thomas (yes he does only eat Picky Bars) and super fish David Kahn.

It was a fantastic week of training and race prep. The facilities and conditions for training are great. Mont Tremblant truly welcomed us. Where else would you see the road being repaved and all the potholes being filled in a few days prior? Cars and vehicles were courteous to us when we were out on the bike! Yes who’d have thought bikes and cars could get along! (I’m talking to you Australia.)

#IM703MT
Bike training and race prep with our Boardman AiR/TTs

The run course was already marked out and there were km’s and km’s of trail and paved bike path to follow (if you didn’t want to take the road) and all of this through stunning green mountains and around beautiful lakes and rivers. It is probably one of the best, if not the best run events and races I’ve been too. The whole organization was just fantastic. 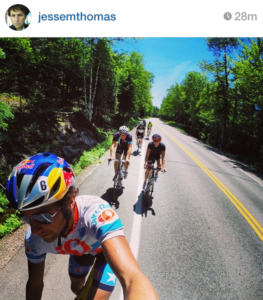 The training camp was constant learning for me, and it was fantastic. Obviously trying to take in everything from Matt Dixon, but also from Paul Buick our bike guru and of course from the other Purplepatch athletes. I’m not even going to start explaining everything I learnt…because well these tend write ups to be long enough as they are, but also as I just would not know where to start to convey everything that went into my head and was processed!

The swim was a lake swim. Although that doesn’t’ necessarily mean it would be flat. For the race on Sunday we were lucky to have perfect glass like conditions, however throughout the week it had been more challenging with there being some pretty windy days resulting in a fair bit of chop, making it tougher to swim and navigate.

Checking out the swim course

It was a beach start, with fireworks as well to really set the adrenaline pumping, when the horn fired. For me, my swim was about my normal. I’m pretty sure I was in the lead for the first 20m, which involved no swimming just a sprint to the water and some dolphin dives, but then after that, the field went away from me.

I swam back up passed two of the other women, but then couldn’t get away and had missed the packs in front. Out of the water and it was then a long run (about 500m) to our bikes in T1, however the whole path had been carpeted (red of course) which was a first, and very much appreciated, as well as the whole way being lined with supporters. Getting to the bikes I was surprised that there were more bikes still there than I expected. I left T1, 3mins down on Meredith Kessler and Julie Dibbens, and 50sec down on Magali Tisseyre. Not sure who else was in between it was just about riding my bike now.

Leading the charge, well for the first 20m which was running into the water.
(Photo creds to Triathlon Quebec)

The bike course is a challenging but fun course. We’d ridden it a few times over the week. It’s pretty much big rollers, with the final 10miles being an out and back over some shorter sharper rollers, just to sap the legs. I was grateful for having been able to ride this section during the week, learning the right way to ride the hills and gear selection.

On race day I felt pretty flat on the bike and just wasn’t generating the speed and power I should have been. My whole left leg was pretty tight but still I just couldn’t seem to be making any ground. One of the motorbikes was taking splits from the leaders, which is when I found out I was in 4th, but the gap to Meredith and Julie Dibbens just kept increasing and I couldn’t seem to make any headway. I kept getting glimpses of 3rd place, but then the next minute they would have vanished and I couldn’t see them on the road ahead. This was pretty disappointing as I’d been feeling good on the bike all week and knew I was capable of much more.

It was only when we got to that last 10miles that suddenly on the second climb I managed to catch and pass into 3rd and was able to come into T2 about 1min/1min 30 up on Magali. However disappointingly I’d given too much time up to the leaders and I was 12mins down. 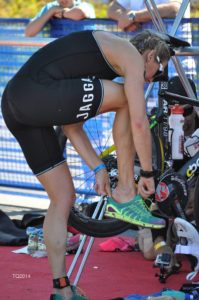 I headed out from T2 and tried to settle in to find my legs. What I did find was that my left leg was completely numb. My foot just a solid lump really. Not sure why, but it stayed that way for the whole run. What was pretty cool though, was that as I was in 3rd , I had a cyclist just in front of me. He was awesome for the whole run, whistling and telling everyone my name as we ran through the aid stations and past supporters, so that everyone cheered and clapped and shouted for me! (oh yes while I remember, also in Transition all the bike racks had your number but your name on too. Whilst the Age Groupers had their first names, the Pros had surnames, but still I thought this was a great idea to add a more personal touch to the race). I had no idea really what splits I was running. I just kept thinking about form and ticking off the km markers. At about 8km the lead cyclist came in the opposite way, with MBK just tucked in behind, but no Julie. A quick high five as we passed and I think we exchanged some form of encouragement between breathes and I then starting looking up ahead to see where Julie was how far in front of me she was. It was hard to tell how far really, so I just kept pushing anyway.

A huge thank you to all the Age Group racer out there, for all their encouragement and support as I was running. As I passed the streams of athletes coming in the opposite direction people were giving me thumbs ups and shouting encouragement and calling my name. This was so fab. I tried to acknowledge everyone and applaud back but my apologies if I missed anyone. It didn’t go unnoticed though and I thank you all for that, it definitely gave me a buzz and energy as I ran.

The last few hundred meters of the run course leading to the finish! Pretty cool huh?!

The last 300m was awesome. The course took you into the middle of the town and you wound your way down the narrow cobbled streets. It was lined with supporters and the atmosphere was awesome. I was soaking as much in as I could. In September for the World Champs, it’s a 2 lap run course that goes further up and down the hill in the town. It’s going to make for an incredible atmosphere.

So there it was, third. My first Pro podium. My first post race interview on the finish line, literally on the finish line, I think it was pretty much 10sec after I crossed (well it felt like it) I think the adrenalin was still flowing or I was full of caffeine and buzzing. My first mini press conference after the race sat next to Meredith and Julie Dibbens, two awesome athletes.

Literally having just crossed the line…
(Photo cred to @IMMonttremblant)

I found out later I’d put in the fastest run of the day and had closed to within 3mins of second, but my bike had let me down badly and so there’s lots of learning to take away from that and improve on. (It’s twice I’ve been described as riding like a donkey and I’m keen not to get that title anymore!) I know there is more to come in all areas though, I’m learning so much and have so much more to learn, and so again it’s confidence that I’m moving in the right direction.

It was a pretty great weekend for all the crew from PurplePatch. Meredith Kessler and Jesse Thomas took out the overall women’s and men’s titles, both smashing the course record in the process. I was third in the women, and David Kahn 4th in the Pro men. Sarah Cameto once again took the overall Age Group title (and is going to be a force to be reckoned with when she goes Pro), Anthony or rather Grandpa Champ, took second in his Age and qualified for the Worlds and Brian took out the XC title and 5th in his Age at the end of a week where he’d been fighting off a cold.

A huge thank you to Matt Dixon. I’m absolutely loving being part of the squad and learning so much, it’s exciting. Thanks to Anthony for running around after us all week and organizing everything. Paul Buick, for talking ‘southern hemisphere’ chat with me (Paul’s from NZ), and of course for all his help on the bike and looking after us and our bikes all week!

As always thanks to the continued support from Jaggad, Huub, Shotz, Kask, ISMSaddles Oakley, Inov8 and Cycology.