Into the Wild….Wildflower Race Report

So just one week after I relocated to San Francisco I was sent off into the Wild….well off to race the iconic Wildflower Triathlon. I’d heard so much about this race as one of the traditional and original races in America and a definite bucket list race. It certainly didn’t disappoint.

Camping. Everyone camps. Now I haven’t camped since family holidays over 20years ago, and I wasn’t totally inspired by the thought of camping prior to a race, however fear not, I was luckily housed in a cabin. This was great. The cabin was right by race HQ and transition. I was sharing with 3 other fab pro’s, which made the whole weekend even better. We were able to make our own food in the cabin, but the race organisers also provided food for us down in HQ, and again I was surprised at how good it was.

Transition/Race HQ/Expo/Finish line was all located at the bottom of a hill, or I guess in the valley, by the edge of Lake San Antonio (well where the lake was meant to be…more of that to come later) and the only way out was up hill. There were two roads that climbed up to the top and we’d get to experience both on race day. At the top of the climbs were where the main campsites were. Different Tri clubs, teams, volunteers, collage students pitched up in different areas, claiming their land so to speak and it really did make it a truly unique atmosphere. It was great too, as part of the run course weaved in and out of all these campsites.

We were able to rack our bikes on race morning, which was good, and then jumped on the shuttle (the classic yellow American school buses) to get taken to the swim start. 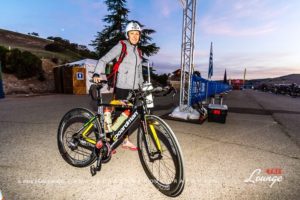 Race Morning. Thank you Eric Larson for this photo. (www.TriLounge.com)

So let’s talk about the course. Having never been to Wildflower before, on arrival and looking out from the cabin to this incredible view across to rolling hills on the other side of some flat land, I didn’t know any different. It was only when the other girls arrived that I was told, this ‘flat land’ was normally filled with water and that was the lake where we should be swimming. Wow! There was not a bit of that blue stuff in sight, it was completely dry. Due to drought and I think repair work needed on the dam, the lake was empty. This meant the swim course had been relocated to where there was still water.

Where the water should be….

No problem really with this, apart from Transition remained in the same place, resulting in a 2.2mile (that’s ~3.5km) run from the swim to our bikes. We were allowed trainers for this, as the route took us firstly up a steep boat ramp, and then up and down sandy trails and along the lake bed, followed by another step boat ramp at the other end to get up to transition. It was pretty cool, but I do think puts quite a different slant on the race and dynamics.

Looking up the ramp from the swim.

Onto the bike, and as I said the only way out of Transition was up. It was a good climb though to find legs. The bike course then loops around the lake, and is constant rolling hills really and false flats, until about mile 40 where you hit an appropriately name climb…”Nasty Grade”. Having not really found form over the first half of the course, the second half I faired much better with the satisfaction of passing (and dropping) the half a dozen Age Group guys who had overtaken me in the first half. However it was probably at this stage a bit of too little too late to make huge impact on the girls in front. I think the expression….”a donkey in concrete” has been used to describe my bike leg!  The course finishes with a screaming mile descent back down to transition.

Onto the run, only 10.9miles (due to the first run after the swim) and it was again a constant up and down. Apparently 60% trails but it felt more like 80%. With the shorten course, the legendary ‘pit’ was missing (this is a mile long descent on the road, only to turn around and come back up, at about mile 10), however there were enough other hills and bumps to take affect. It was a pretty cool run course though winding in and out of the terrain on trails. Can’t say I particularly enjoyed the steep climb up out the valley at about mile 6. It was again all sandy trail and just went on and on and most people were walking. I think actually it could have been quicker to walk up. The back end of the course then weaved through the camp sites which was great. The spectators were awesome, everyone had super soakers spraying us, even the volunteers at the aid stations were great at throwing the cups of water all over you as you ran through, to try to cool off. It was very much a festival and party atmosphere and a huge motivation to keep moving. They’d even often give you updates on your position and how far to the person in front. Having had a less then sparkling bike, my run wasn’t too much better, but I did managed to pass 3 girls on the run, so snuck into 9th place. The last girl I passed was about 1.5miles from the end on a steady climb before again, descending the steep mile hill to the finish. This was a nice little quad buster to finish on but at least at the bottom of this hill you were straight into the finish chute. I made sure I enjoyed the finish chute as much as I could, soaking it all in, and trying to take in the atmosphere. My first Wildflower complete. Whilst it wasn’t a sparkling day for me, it was a relief to have a race under my belt. I would have loved to have been higher and closer to the top girls, however for this race the aim was just to have fun and I did (albeit only starting at mile 30 on the bike, and possible went missing between mile 5-7 on the run, but it soon returned)

The last athlete crossed the line at 730pm. I wish I’d known as I would have loved to have been at the finish to welcome them home. I was able to watch from the cabin though and it was awesome to hear so much noise still being made down the finish chute. What an incredible day.

Sadly I didn’t get to experience the ‘naked’ mile. Tradition or folk law tells, that at one point on the run, a load of, I think college students line the course, naked (or jump out of the bushes and run with you). Officially I don’t think this ever happens, and sounds like if it did happen it’s only reserved for the leader, so next year I’ll have to race faster.

Finishing in the top 10, meant I got to stand on the stage at the awards, as Tri California recognize the top 10 male and females. (Thank you Tri Cal.) I think the best moment, and possible the best moment of the weekend, was getting a congratulatory hug from the three-peat winner Heather Jackson, as she collected her winners medal, and the fact that she knew/remembered my name. Ok so they had just announced it, but still I was impressed, and yes I’m still a massive tri groupie!

Unfortunately due to not being able to face going up another hill, I probably didn’t experience the ‘real’ Wildflower experience of all the camp parties on the Saturday night, so I’ll save that for next year. I did however get introduced to S’mores which I have to say pretty much topped of a good day.

Being introduced to S’mores

For those interested in Wildflower for next year, they also had a mountain bike race on the Saturday, and ran an Olympic distance on the Sunday, so there’s lots of options for people, as well as obviously the long course and just coming to experience the ‘Woodstock’ triathlon experience.

I’m now back in San Fran, and with a race done, I’m fired up to get stuck into training and whatever Matt Dixon throws at me. The first couple of weeks have been awesome. I’m incredibly lucky to be staying with a fab couple (Jordan and Rich Blanco) from the squad in their gorgeous house, in an awesome location right by the Presidio Park and the Marina, and only minutes on the bike to the Golden Gate Bridge. I know I’m being very spoilt. Everyone in the Purplepatch squad has been so friendly and have welcomed me into the team and to San Fran. Thank you to everyone for this support. It’s very much appreciated.