Where do you start to describe and explain the experience and opportunity of spending 4 days on the Tri Dynamic camp with Darren Smith. If I start to even try to list and explain the amount of knowledge and information that was shared, absorbed and taken in over the camp, this would turn into a novel, and my bloggles aren’t short at the best of time.

Darren Smith I don’t think really needs much of an introduction. He’s one of the most successful coaches in triathlon. Just in 2012 he coached 5 athletes to the London 2012 Olympics, 2 of which finished in the top 4 (Lisa Norden (2nd), Sarah Groff(4th)). Lisa was also crowned 2012 World Champion, with Anne Haug in 2nd. Lisa carried on her fantastic season with a win at Hy-Vee (for the second year) and Jodie Stimpson finished 3rd. He’s already had success in 2013 with Annabel Luxford winning Auckland70.3 and his stellar squad is looking like it’s going to have some fantastic results in the coming years. However Darren’s pedigree is much more than 2012 and 2013, it’s a result of years of experience and planning and creating a world-class environment and support network for his team. 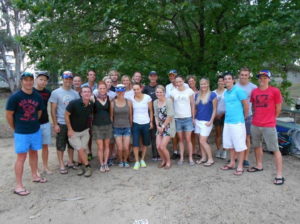 So you can understand why I jumped at the chance to attend the camp.

Darren Smith or “Coach Daz” as his squad often calls him, is also often called, “the Professor” and now I understand why. Apart from the fact he does have a Ph.D in Sports physiology, he’s all about detail. He is constantly watching, critiquing and analyzing his athletes. He knows every aspect and habit of his athletes. He can mimic their swim stroke or running style in order to be able to help them correct it. He will happily stop an athlete mid rep, set or session to remind them about their elbow, or right hand placement or whatever the detail is. He is about getting all the little things right, all the time, every time and getting the athletes to think and learn for themselves as well. (He also does have his ‘cut their head’ off methods if needed at times too!) He’s pacing the pool deck or out in a canoe beside the athletes in their open water sessions. He’s running with them or on the bike. His hours and commitment to the athletes and the squad is impressive. He’s persistent and has I think a tenacity, that I guess could become intense at times, is however something that I believe is necessary in demanding the best of the best and something I would want from a coach if at that level. To me it shows they are fully committed and are wholeheartedly interested in the athlete and improving. 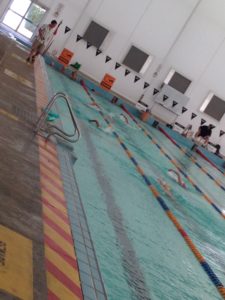 Not really knowing what to expect, I was pretty (ok very) apprehensive about the camp and what Darren would be like. It was almost like those pre race nerves and feelings. I appreciate that he may have toned down his style, manor and comments for the camp, or that his expectations weren’t as high in terms of our abilities. However although I probably remained a little intimidated by him and in awe I guess by being coached by him and around his elite squad, I found Darren to be very welcoming and genuine with us. He made us feel like one of his full time squad with the level of detail and attention. I guess he has quite a soft and calm approach, which encourages and gives you a level of comfort. He’s happy to have a laugh and banter, but you can tell there’s an underlying authority and firmness and ‘no messing’ attitude and approach and I certainly wouldn’t want to be ‘p*ssing’ him off.

It’s not just Darren though that is impressive. It’s the whole environment that he’s created in Canberra for his athletes. It’s a world-class team and support network to ensure the best can be achieved and his athletes are kept in top condition and injury free. Dsquad Rehab Specialist Rick van Riemsdijk is always poolside to release tight muscles and ensure the athletes have full range of motion to be able to perform to the level they need. For the duration of the camp not only did we also have access to Rick, but also Chiropractor Colin Clarey who worked with Darren on the Gold Coast. They have a team Physio, Rox Penfold as well as Dr. Liz Broad, an AIS Dietician (who we also got to listen and chat to about our nutritional habits and needs). We were also incredibly fortunate and privilege to be able to have a run session with Rob Higley, (who advised Olympic Champion and 800m World Record holder David Rudisha). Rob lives in Kenya but was flown over to spend a few weeks with Darren’s squad focusing on running technique. It was great to have the opportunity to spend a session with Rob too, I could have listen to him for hours and will look for future opportunities to hear and learn from him. 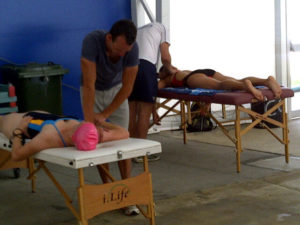 The facilities the squad uses, are nothing flash or special but just fit for purpose for what’s required. They don’t use the AIS facilities in Canberra but the local venues within the city and surrounds. Swimming takes place at Canberra city pool, and they use Lake Burley Griffin for open water sessions. Now anyone from Australia will know that the lake is not the most pleasant of open water venues to swim. Murky and brown, the swim leg of triathlons is regularly cancelled in Canberra due to toxic blue-green algae blooms. However Darren happily told us he’d never ‘seen’ a sign saying, “Do not swim” by the lake! Running is not at a track but on the trials and paths around the lake and parks all a conscious choice in developing his athletes to be robust and able to tackle any course that’s thrown at them. 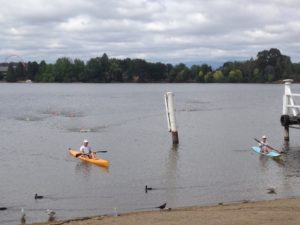 So what did the camp actually entail? Each day was a combination of sessions, both theory and practical. We had some double swim days and some double run days with other sessions mixed in between.

Topics included rehab, recovery, pilates, strength conditioning and nutrition. We had the chance to watch and observe the elite Dsquad athletes train and see Darren ‘in action’. We were also able to join in with some of their sessions. This was hugely motivating. 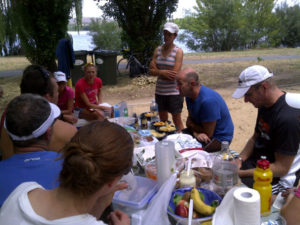 We also had a few opportunities to relax and meet the Dsquad athletes at dinners or BBQs and gained a great insight into their lives and the life of the Pro athlete. The camp was limited to 12 people. This was a definitely plus as it enhanced the learning and direct engagement and interaction with Darren and the squad. It was by no means a ‘smash’ fest either. So many camps are about squeezing as many sessions into the day as possible, all of which you are trying to do at 100mph and intensity. This camp was different and rightly so. It was about learning and skills development. It was a good balance of sessions and relaxing. Having said that, I couldn’t get enough. I’m a tri junky and just couldn’t get enough of it. I would have happily, in between our sessions, have camped out at the pool to be able to watch the elites train or turn up at a run of bike session they were doing just to watch and learn from them and Darren. As mentioned even though it wasn’t hugely physically demanding I was still achy and tired at the end of each day knowing I’d worked both my brain and muscles to make changes and get all those little things right.

So what were my learning and takes aways from the camp? Well as mentioned earlier I could write a novel on everything I learnt and was frantically taking notes all the time to be able to remember the huge amount of valuable information being given to us.

I guess for me though it’s about making sure that everything you are doing in training (and in life) has a purpose and reason that is linked towards performing your best. Don’t just go through the motions of a session to hit a time repeat or rep or to get a session done. It’s remembering to think constantly and focus on your technique and getting the detail right all the time in everything you do. Even when you’re tired make sure your thinking about the little things and focusing. When I returned to my squad after camp and was going through some of the exercises we’d done, one of the remarks was ‘this is boring’. It’s the AG mentality that every session has to be intense, eyeballs out. Standing still, on one leg with your eyes closed for 60sec, engaging your core is just not of interest to the standard Age Grouper. But this I understand now and believe is just as critical. It’s getting all these little things right that add up to improving your performance.

I also learnt, that I wanted this. I wanted to be in that environment where my ‘9 to 5’ job (or in reality my life (it’s I believe a 24hrs job)) is training and focusing on being better than you were the day before #betterneverstops 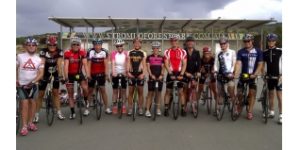 A huge thanks to Darren, his team and his athletes for making us feel so incredible welcome and for imparting and sharing so much knowledge. Thanks also to Martin at Tri Dynamic (www.tridynamic.co.uk). Martin did a fantastic job at organizing the camp. It ran smoothly and without a hitch and was relaxed and flexible so that we got the most out of the opportunities with Darren. If you get the chance to go on one of Tri Dynamics’ camps in the future. I can definitely recommend them and I’ll be signing up for the next one for sure!