Geelong is a coastal town, about an 1hr south west of Melbourne in Victoria, Australia. It forms one of the Australian Olympic series races and one of the Australian qualifiers for the World Champs in London and is hosted by USM Events. The weekend is a typical USM festival with swim events, enticers, fun runs and all distances of triathlon races across the two days.

Having never raced Geelong I was excited to venture down to Victoria for the event. It was also the Australian Long Course Champs the same day, which had a stellar line up in both the women (Moffatt v. Hauschildt) and men’s (Kemp v. Kahlefeldt) events, so I was keen to watch that, as well as the Sprint Champs in the afternoon. It was going to be a great weekend. 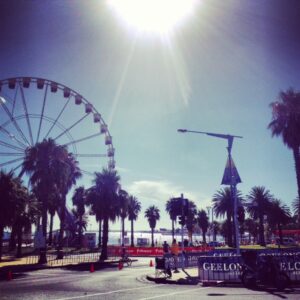 I’d not raced since Noosa and Auckland back in November 2012, so I was not really sure what shape or form I was in. The last couple of weeks had been a bit up and down as I’d not been running due to a hamstring niggle and going with the line of “it’ll be alright on the night” hoping once in the race I’d just run through it, whatever. Also, if you put yourself on the start line, all excuses, all injuries, all issues have to go out the window. Suck it up and get on with it.

One of the big rules in triathlon, is don’t do anything new on race day. So I was racing for the first time on my new bike, my Boardman AiR/9.8 TT (Big thanks to Wiggle and Boardman Bikes) as well as a new saddle (ISM Adamo Racing 2). (Also here with my Zipp 404 Firecrest wheels – love them!) 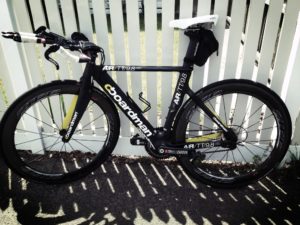 With Australia being so large, most races mean you have to fly to get there and it would not be a race and it would not be me flying with my bike if there wasn’t a drama. It was with minutes to spare before my flight to Melbourne on Friday night, that I found myself in the Qantas Check In area at Sydney airport with a bike not fitting into the bike bag! The seat post was jammed and would just not budge. I was sweating like….(insert your own analogy)… as the minutes ticked by closer and closer to my flight. Finally having to actually remove the saddle, the bike bag was zipped up and loaded, leaving me to cross everything in my body hoping it would travel safely! A huge thanks to the boys a Beretta’s Bike Studio for helping me fix everything on Saturday morning! Legends!

On race morning we found out it was a non wetsuit swim. This wasn’t particularly an issue, (apart from being sad at not being able to race in my Zone3 Vanquish, but it was slightly odd as we (the Open Age Groupers) were starting in the same wave as the 40-44 and Premium Mates, all of who would be wearing wetsuits. It was a pretty big wave start too, so the usual mayhem of all arms and legs at the start of the swim. After the first few hundred meters I tried to get my bearings and work out who was around me. I started to notice a few bare arms (i.e. non wetsuit swimmers) just ahead but I was gaining on them and the pack in front. After rounding the first can I was over taking swimmers and moving up the side of this pack and starting to make a move to bridge the gap to a few swimmers I could see up ahead. I exited the water with Kate Grattan, who’d been about 20sec ahead of me out the water at the World Champs in Auckland, so this gave me some confidence. Kate has a rapid run though and she shot through transition.

Out on the bike and the plan was…”if any boy goes past you, go with him and chase him down”. So this is what I did. It was pretty busy for the first 10km, as the Long Course athletes and Olympic athletes mixed. Let’s face it too…no boy enjoys seeing a female pass them, so it was a bit of cat and mouse with lots of over taking and dropping back to maintain the 12m draft zone. A 12m draft zone is pretty ridiculous when you have that many athletes on the course and there were a fair few big pack of bikers with a dodgy image of 12m! I think I only saw one TO the whole course as well.

I could see a big pack up ahead so I set about chasing them down. It turns out that most of this pack were long course athletes who all turned left as us Olympic distance hit the turn around and turned right. This left a huge expanse of road ahead of me to chase down the next pack of riders. I could see them in the distance and that was the goal. I could see I was closing on them, or at least I kept telling myself that to keep me going. Probably about 5km before being back in Geelong I caught up with a rider, only to realize it was my best buddy Matilda Raynolds competing in the long course. I quick yell as I passed, a wave and a smile (actually I think I yelled some abuse at her to be honest) and then it was onto chase down the next riders. Having not really run for the past few weeks I probably went a bit harder on the bike. Well I’d got nothing to lose, my leg would hold or it wouldn’t on the run. I also knew that some of the girls (Sarah Lester and Kate) had some fast runs on them so I needed to put as much time into them on the bike as I could 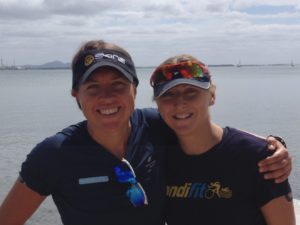 Into T2 and out onto the run and it was a bit of an unknown, was my leg going to hold or what was my run fitness like and as I knew the first 5km were up and down around the gardens I wanted to just build into the race, knowing or hoping I could open up on the second 5km which was flat and straight. Running out of T2 was such a buzz though. The crowd and support was great and it was fab to hear my name being called out by friends and supporters, and let’s face it, it’s always a bit of a buzz when they call your name over the loud speakers! 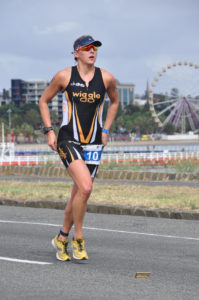 Having completed the loop round the park, getting another buzz seeing the likes of Emma Moffatt running on just the other side of the cones and yelling out to Anna Cleaver and Matilda again, I headed down past transition and towards the finish. Stupidly thinking it was just a straight out and back and that it was almost done! Ha! The course took us all round the edge of the foreshore area. The sun had suddenly appeared too with some bite. It was pretty quiet too with hardly any spectators and no officials out there. It seemed to be going on forever. Where was this frickin turnaround! I had to go through all my running checks to keep focused on the job in hand and keep going. Having said that I did have a great surprise to suddenly hear my name being called to look up and see an ex-work colleague from Sydney and his family (who now live in Geelong) sat at the side of the course cheering. But this ‘out’ section seemed to go on forever. The turnaround just didn’t want to appear, when it eventually did, they had the cheek of putting a short sharp steep hill to get up before turning back for the last 2km to the finish. Just take it steady up the hill I thought, only to realize that you actually still have to move forwards you can’t just grind to a halt, which is what it felt like and at the top. 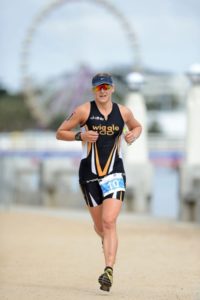 (Thanks to Deli Carr for this photo)

It was at just over 1km to go that a bike appeared and with some naïve and rookie excitement I had to ask if the bike was going to lead me into the finish as the leading female! This made me smile. I’ve never had that before and I had to do a quick double check over my shoulder to see if I was being caught or run down. About 200m to go and the bike stops, waving me past and it was just me and the finish line now. I could see they had a winners tape across the line. In the races I’ve won, I’ve never had the chance to run through a finishers tape as normally you are all mixed up in different age groups and waves. So a huge thank you to USM and Geelong for allowing me to have the winners tape to run through. I think I actually asked if I could keep the tape afterwards! I must have sounded so rookie! Ha! Ha! (However next time USM please can you make it that I can keep it. I think I even tried by walking off with it around my neck!) But it was great elation and a huge smile to finish and the buzz of hearing your name being announced and then seeing all the friendly familiar faces at the finish too. Knowing that it was over! Ha! Ha! I guess you wonder why we do it when the finish can never come quick enough!

Overall, I’m happy with the result, got to be happy with a win and hey I got to run through a finishers/winner tape! That’s a first too and wouldn’t mind having that feeling again! However as all athletes do we analyse, critique and break the race down bit by bit. I know I have a lot more work to do still in all elements. There was a lot I could have improved on and done better on Sunday. I still feel I’m learning and still feel so new to the sport but it’s great that I know there’s still so much more to learn and improve. Next up is Devonport in Tasmania, another new location for me to race in.

It was great to see Sarah Lester come in second. She’s taken a huge leap by giving up work to train full time and I have the utmost respect for her plans and goals. It’s great to see her making big strides forward (not just because of the length of her legs) in the sport. I wish her all the best! 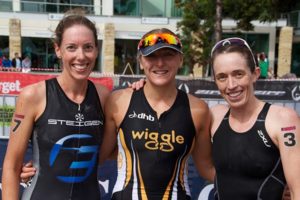 The long course turned out to be the race it was previewed as. Chris Kemp backing up from Auckland with the win and then Melissa Hauschildt holding off fast paced Emma Moffatt at the finish. I was also able to watch my good friend Til’s (Matilda Raynolds) cross the line and it’s great to see her starting to show the form again that I know she’s capable of.

A huge thank you to USM for putting on once again a great event and to Geelong for being a fabulous host and pulling out the good weather! As an Age Grouper I’m very fortunate to be sponsored by Wiggle. A rare opportunity for us age groupers to be sponsored, so I have to say a big thank you to Wiggle for all the support they provide me. As well as Spot Anderson, Turbo Studio and the Bondifit crew I train with, these races are very much a team effort from that point of view.

A whole selection of Easter Eggs