It’s taken a few days (ok weeks) to think about putting something down about the last few weeks/months and my last couple of races.

To be honest, I’ve been in what I think is called a hole. Mentally more than physically, and it’s taken a lot of grumpiness, moping, and generally feeling sorry for myself, before I’ve managed to kick that to touch and start to think rationally, see logically and basically put things back in balance. There’s been a lot of self talk, a lot of questioning, a lot of reasoning, like I said a lot of moping and generally scraping myself off the floor.

Coeur D’Alene Ironman – I went into this race feeling good. I’d had a great block of training leading into the race, with consistency and some solid sessions in the bank. I was in a good place. I had another fabulous homestay and was feeling relaxed and ready to give it a shot. 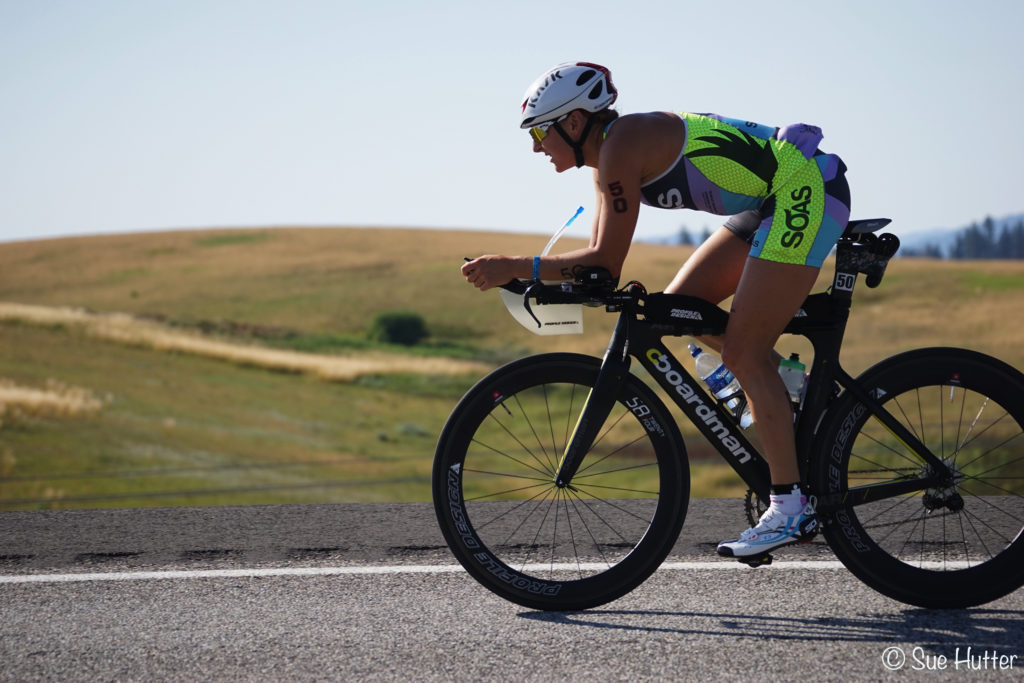 The race started well, I had one of my best swims to date. No surprise I missed the pack after the initial start, but then to my surprise I found something, and managed to pull myself back onto the feet of 3 girls ahead. Learning from my past race, I made sure I was prepared for any surges, particularly around the turning buoys, and made sure I was trying to work myself up the small pack, e.g. not being the last person in the chain, and therefore risk being dropped. It was a 2 lap swim, where we actually had to come back onto the beach and through an arch before re-entering the water. I took a slightly wider route on the beach on purpose, as this meant I re entered the water a little ahead (running is faster than swimming), putting myself at the front of the group and again not risking falling off the back.

I exited the water and transitioned to T1 feeling good and exited to get on the bike. Even for the first few minutes on the bike I felt in a good place, relaxed and controlled but ramping up the engine and legs. Sadly that was about the best it got. I’m not really sure why, but for the rest of the day my body didn’t execute what I know it could from training. I won’t dwell more on the ins and out of the rest of the race, I just didn’t bring it. 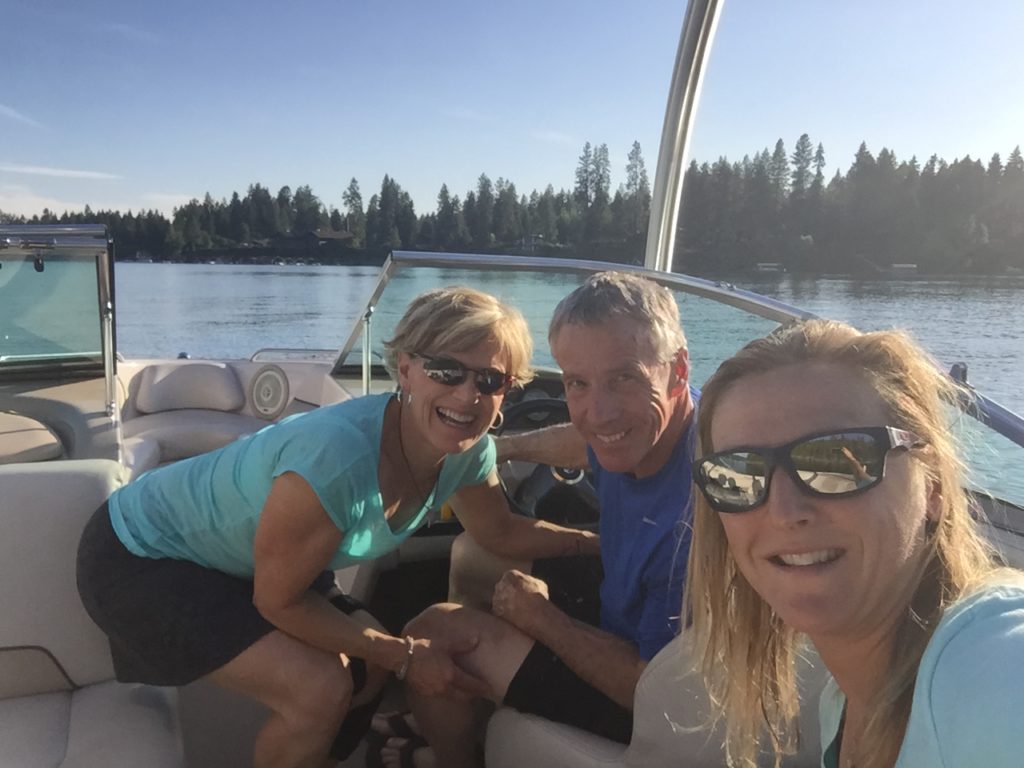 It’s not every day you travel to dinner by boat! Big thank you to Maggie and Marc Lyons for looking after me.

I do just want to say though a huge thank you to my homestay, Maggie and Marc Lyons for being amazing and welcoming me into their home. Also to Sue Hutter for being an absolute legend and looking after me as well and always keeping an eye out for all of us Professionals. Again, it’s very much appreciated and doesn’t go unnoticed! Thank you! 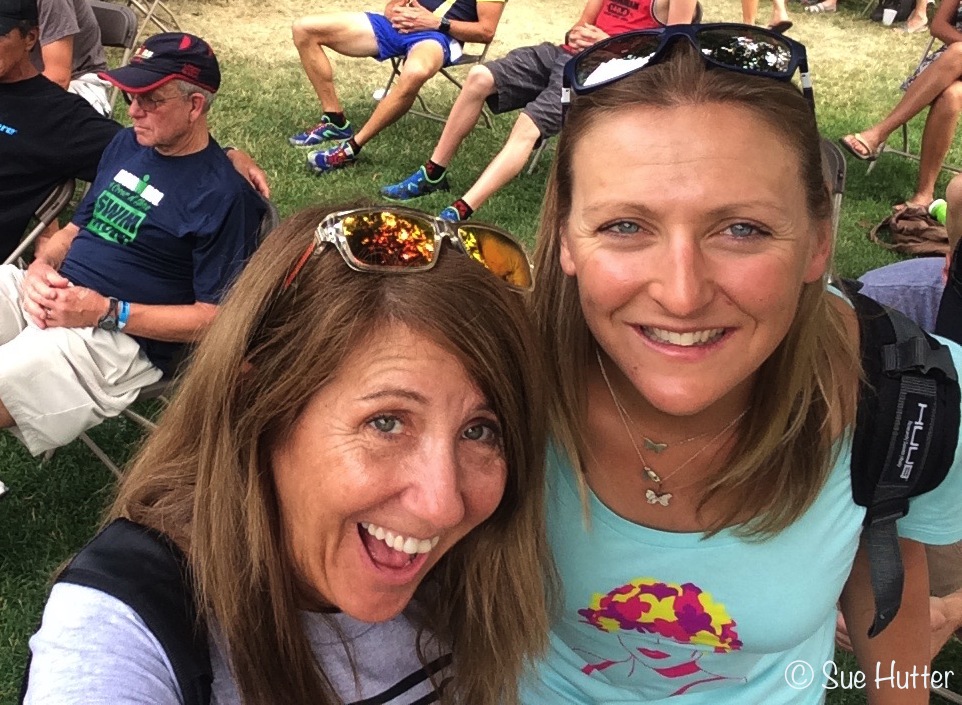 Big thanks to Sue. Awesome to meet you and chat. Will send more liquorice!

A mix of emotions hit after CDA. Anger and frustration and a desire to get right back out there and hit another full distance straight away. However there was a lot of emotion involved and so I had to be conscious (as well as guided from some close and experienced friends) of not necessarily acting on these emotions.

Vineman 70.3 – The decision came to race Vineman 70.3. I’d raced the year before and loved it. It’s a great course, so beautiful as you ride and run around and through vineyards, and the bonus with it being just a short drive from San Francisco. I could stay with Kym and Ken Lydon, who had looked after me so well the year before, and there was a huge crew going up from San Francisco, so loads of support and friendly faces racing as well. 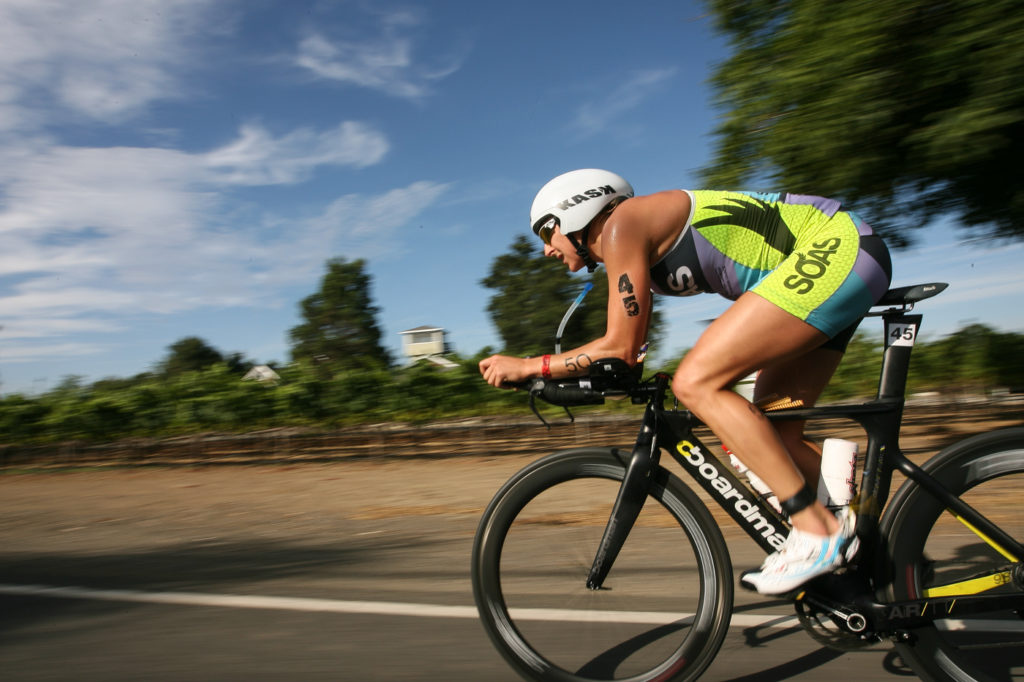 I guess it was also a race, to hit it. A little like when you fall of your bike or a horse, often the best response is to get straight back on and ride again. So this was the plan. There was a pretty big field too, with several World Champions and quality athletes, so it was very much, front up, give it a crack, don’t die wondering, and don’t worry about the run! 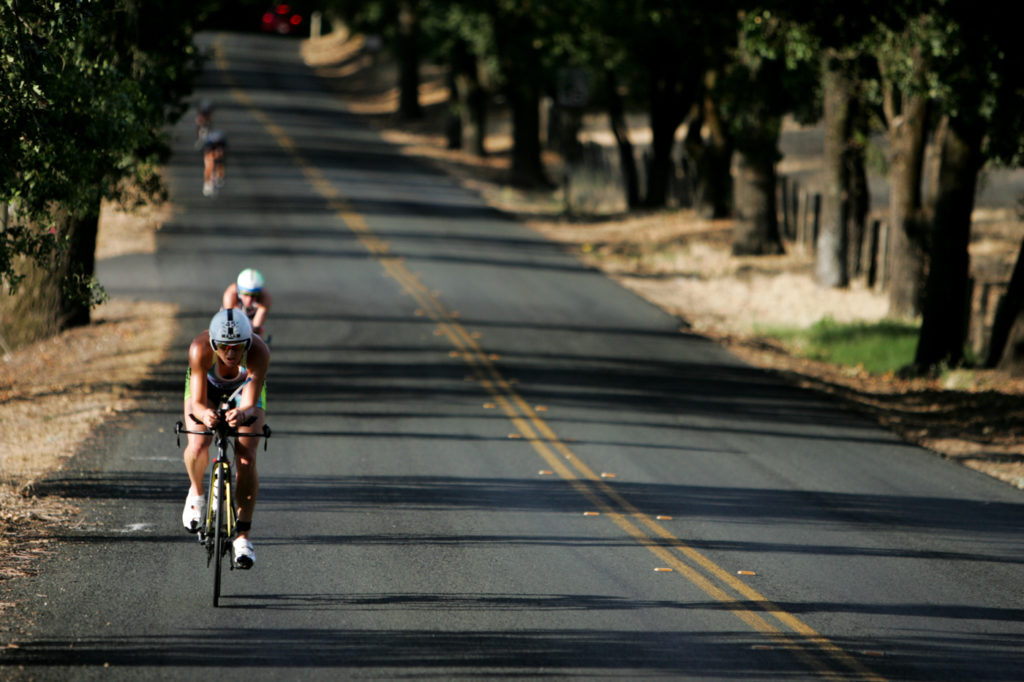 Such a great bike course through the vineyards and countryside (Photo Cred. Jeff Kapic)

Even in the days leading up to the race, I wasn’t really sure what to expect or if I was going to be ready or even wanted to do it. I wasn’t sure what my body was going to do on the day, and what would happen. This in hindsight was probably a good thing. I had no expectations and just went in with a plan for the swim and bike. 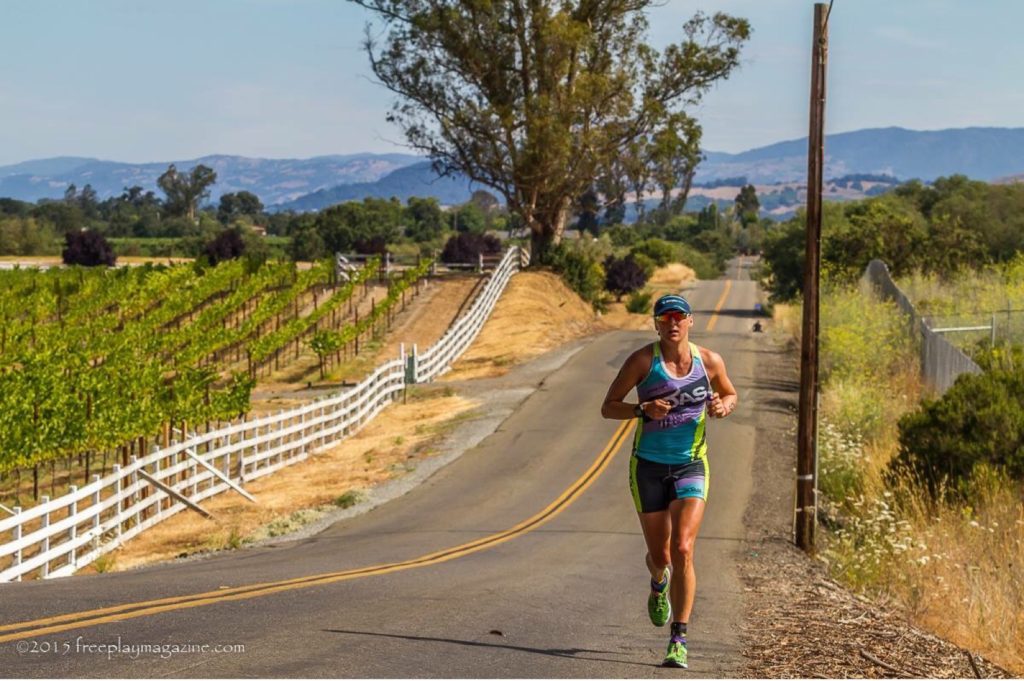 The result, I made the podium in 5th. To be honest, whilst initially pretty happy, I still wasn’t really pleased. Even though I’d gone in with no expectations, and it’s taken me a pretty big slap in the face to get control and realize it was a decent result. Considering my last 4 results and races, this was back to being a step forward and back in the right direction. 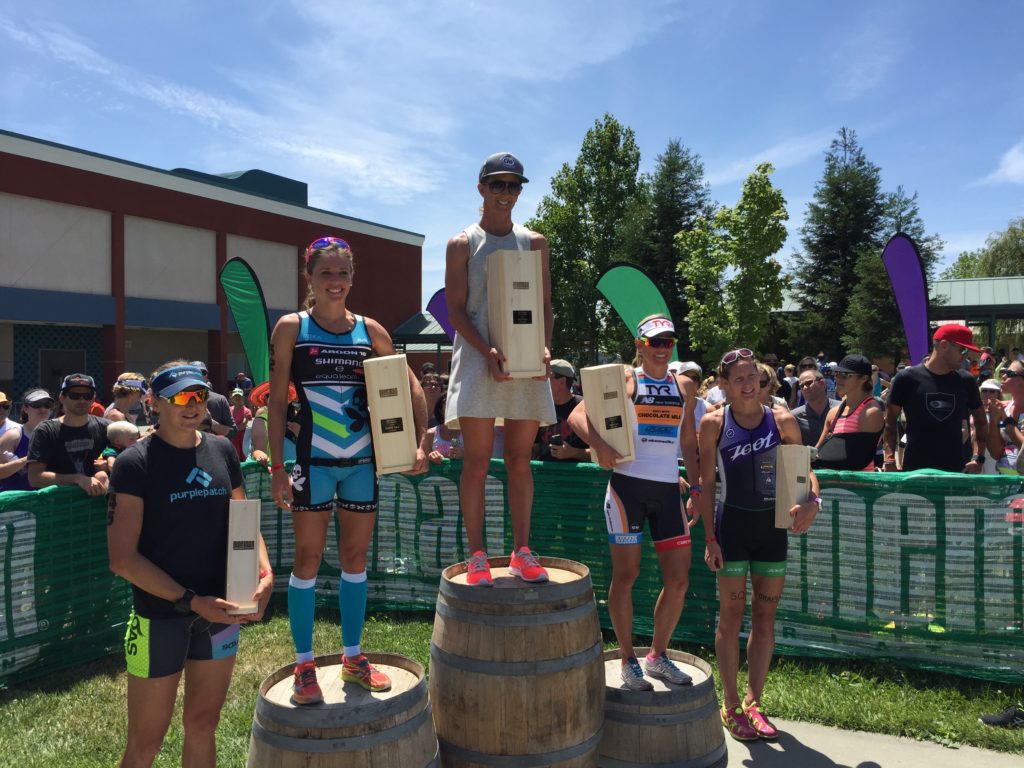 Podium finish in 5th, and a bottle of wine! Thank you.

Again, I had a good solid swim for me, so that’s two in a row. I’ll take that. I had a solid bike. Nothing blistering or what I know is in me and how I can ride (I’m still trying to unearth that for a race), but it was again a step back in the right direction and a solid performance. The run was well…less than pretty. I’d had a great run in 2014 on this course and was looking forward to getting the legs moving on the rolling terrain this year. Sadly though they were probably still in CDA, and it was a struggle to get moving. Whilst I moved up a position on the run, it took a lot of energy to keep myself going, trying to focus on form and good rhythm. 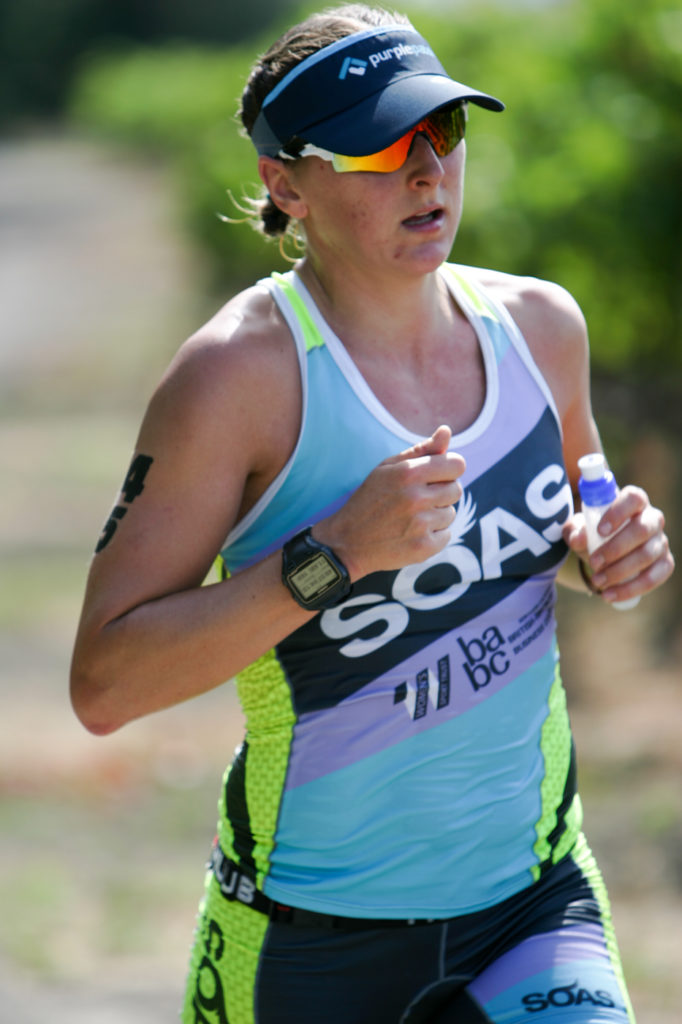 There was a huge amount of support out on the course, which was amazing. The aid stations were fantastic! Special mention to the guys at Golden Gate Tri and San Francisco Tri clubs for their aid stations, but a big shout out to the Viva Pink team! They were fabulous! So energetic and enthusiastic it was great. You could hear their cheers and shouts for the whole laps around the vineyard, which was very cool. Thank you – your efforts were very much appreciated. 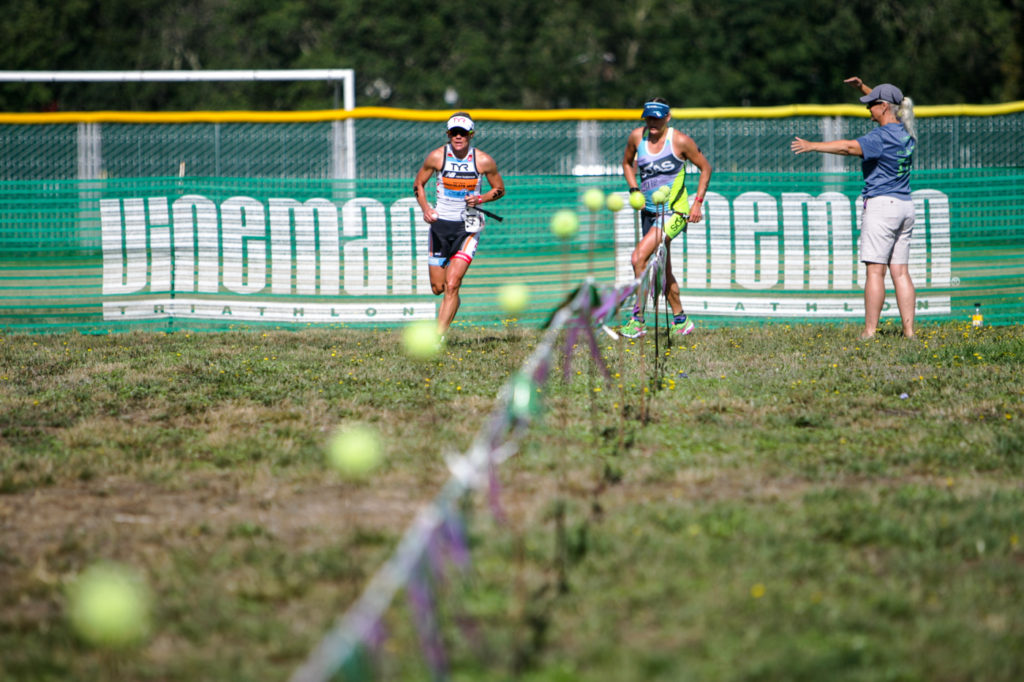 As said, after an initial brain spat of again feeling frustrated and annoyed at my race, I’ve now processed it, rationalized things, talked it through and seen the positives and will take them for sure. Again it’s taken a few slaps in the face, some self inflicted, and some from a few good friends to get myself back in balance, but I now feel I’m back on track and loving life. I’ve taken some strong learning in the past few weeks about what I’m aiming for with this sport and career, and where I want to go. I’m looking at things in a different and better way, with a focus and new lens, which makes me feel so more settled again. I know I’m talking in code here, but I almost feel I’ve taken some pressure off myself and some expectation. I’m not saying I’ve lowered my goals or standards, hell no. I’ve just taken a different look and cleared a few things up.

As a consequence, the next few weeks have changed. Where I had initially planned to head to Ecuador for the 70.3, I’m now re directing and heading up to Mont Tremblant for the Ironman on the 16th August. From here I fly to the West Coast of Canada for Challenge Penticton Half. I’ve been keen to do this race, since racing in Wanaka, NZ back in February, so I’m very excited to be heading there at the end of August. 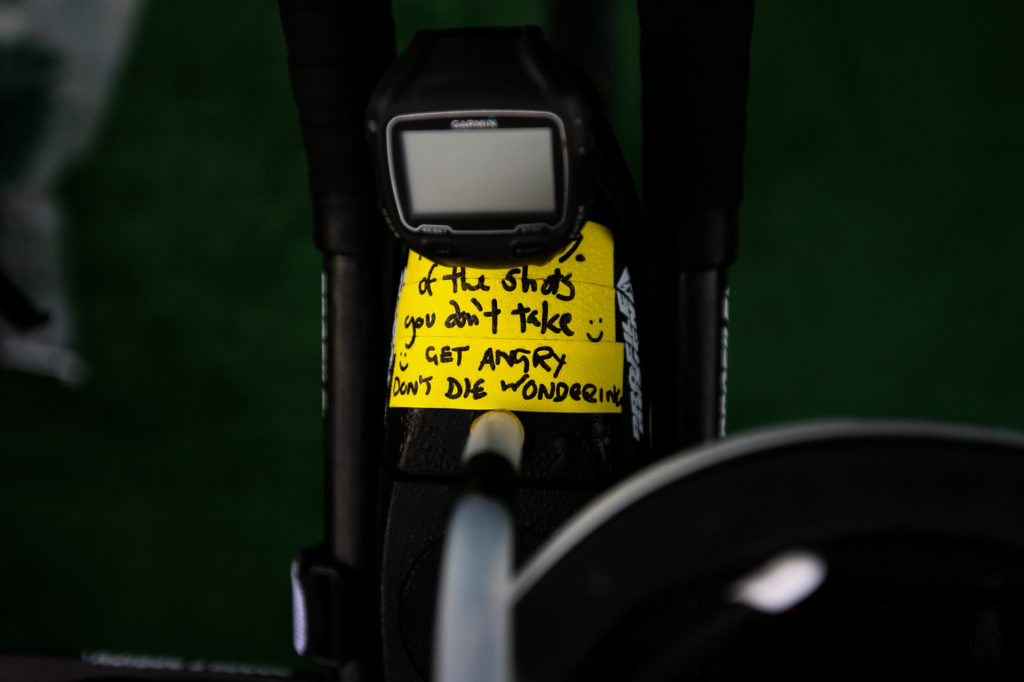 Back to standing on my head!