From Germany to Poland and the European adventure continued. I seem to be making a habit of adding races back to back. As I did in February racing Challenge Wanaka and then two weeks later Ironman Taupo, we decided to put Challenge Poznan, a half distance race in Poland, onto the calendar, which was just a week after Roth. It made sense to make the most of the time being in Europe, and again would be a bit of an experiment and learning experience. 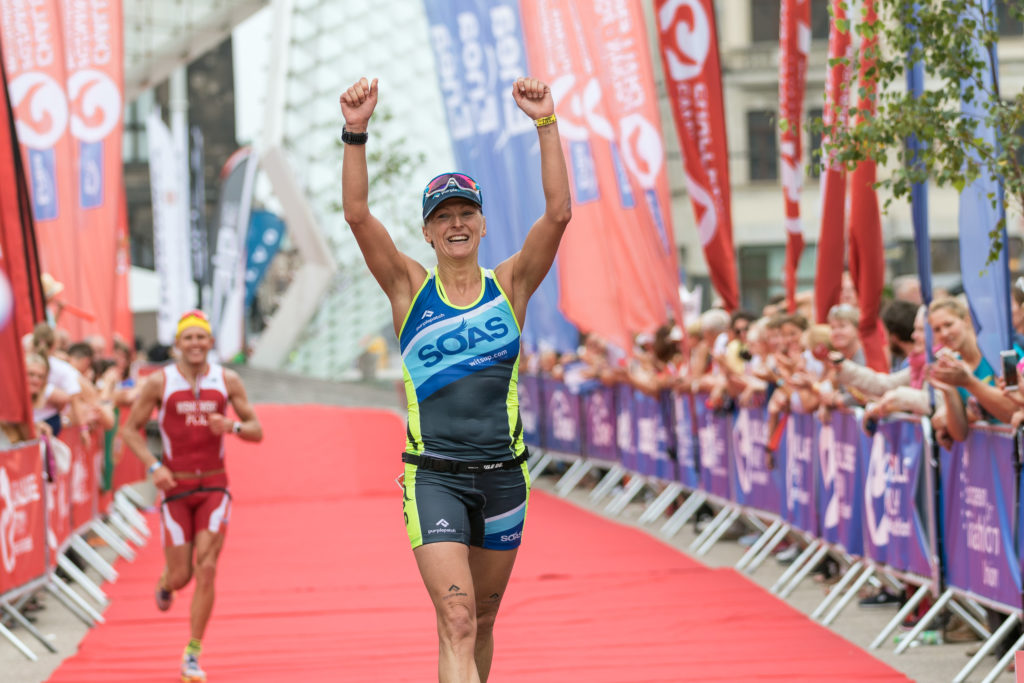 Crossing the line – my first win as a Professional Triathlete

Therefore, after my race in Roth, I had to keep some focus, whilst trying to enjoy the post race activities (that Roth does so well), let things soak in and let my body recovery. I was able to enjoy a cheeky tourist day in Munich, prior to flying to Poznan, which involved cycling around the city, drinking beer…well most of the beer drinking was left to Stef Hanson and Meredith Hill. The Beer Bike driver was quite worried when 3 feeble women turned up to cycle. The bike normally takes 6 people! We assured her that we would be able to move the bike and we did! 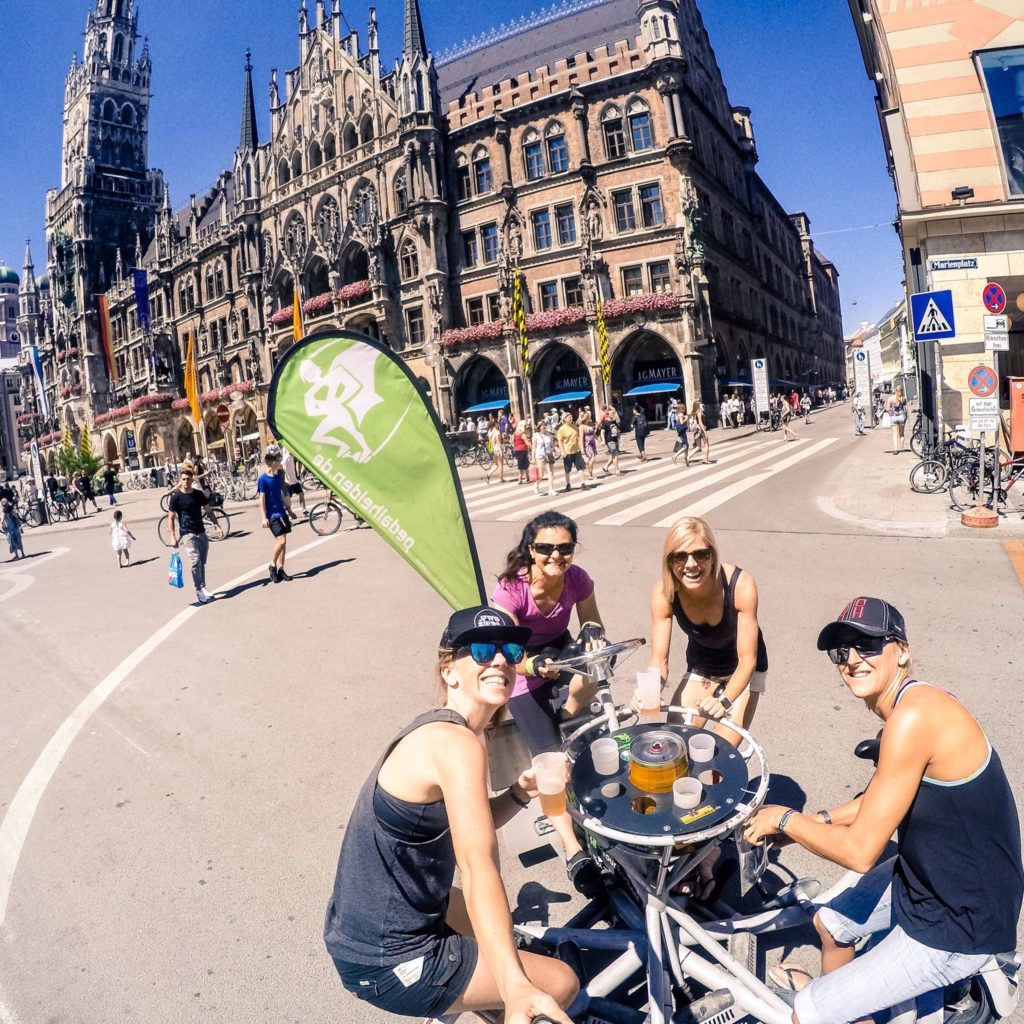 So on to Poland. As with Roth, it was such a buzz being in Europe. Poznan was the same. My hotel was right on the edge of the old town square and I enjoyed the morning wandering around taking it all in, after I arrived and before I headed off to get my bearings and spin my legs out.

Challenge Poznan was a relatively last minute decision and again, a bit of an experiment, as we wasn’t sure how I would back up with just a week between races, but we were keen to see. The race was a midday start, so an extra half day recovery! Bonus! It was actually really cool having the midday start. I was able to get a full nights sleep, and then get a good 25-30min easy run in when I woke, followed by a leisurely breakfast before I headed down to the race. (It was the same day as the ETU Long Distance Championships, which had started at the usual early start.) 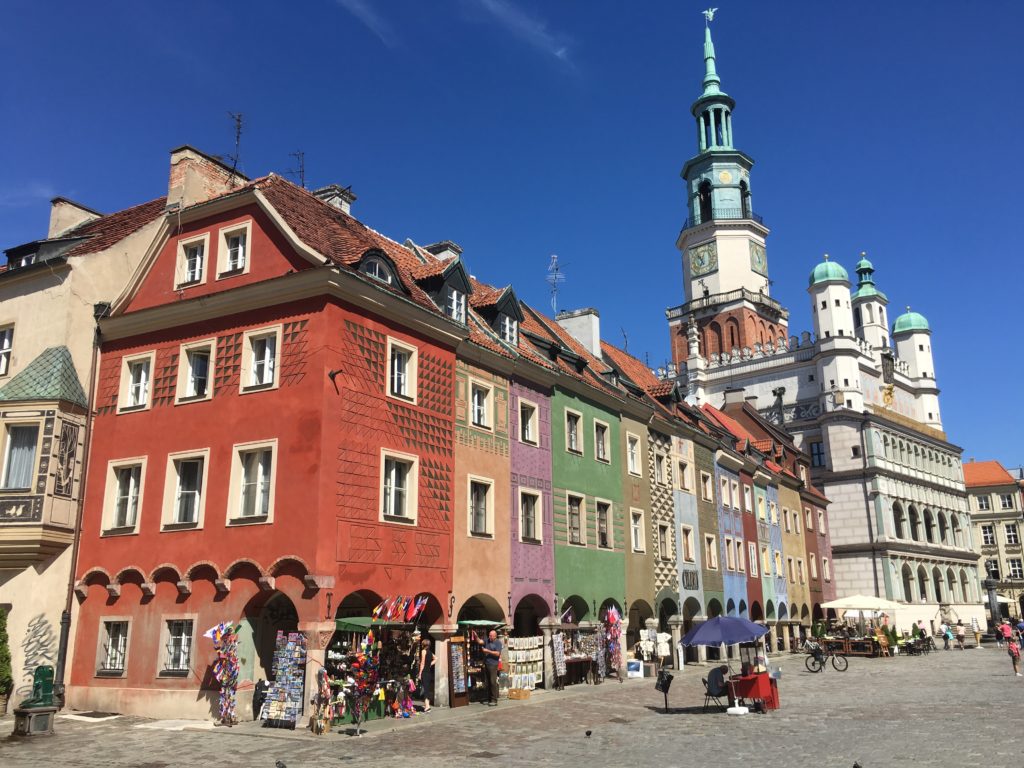 Again the start was mixed male and women professionals all together, and I got to experience my first false start. We had a warning of 60sec and then someone in the crowd blew a horn. Even though we knew it was a cannon that was going to start us, the horn just set everyone off, and well you don’t want to get left behind in case they don’t recall you, so everyone just hit it. They did stop us after perhaps 30m or so and we swam back for a restart. I knew the swim would be fast, being with the men but also with Catherine Jameson in the field who’s a super fish. I got a good start and was on the back of a pack, but being on the back of the pack is not really ideal, as the elastic started to stretch and soon snapped and I was in no mans land. 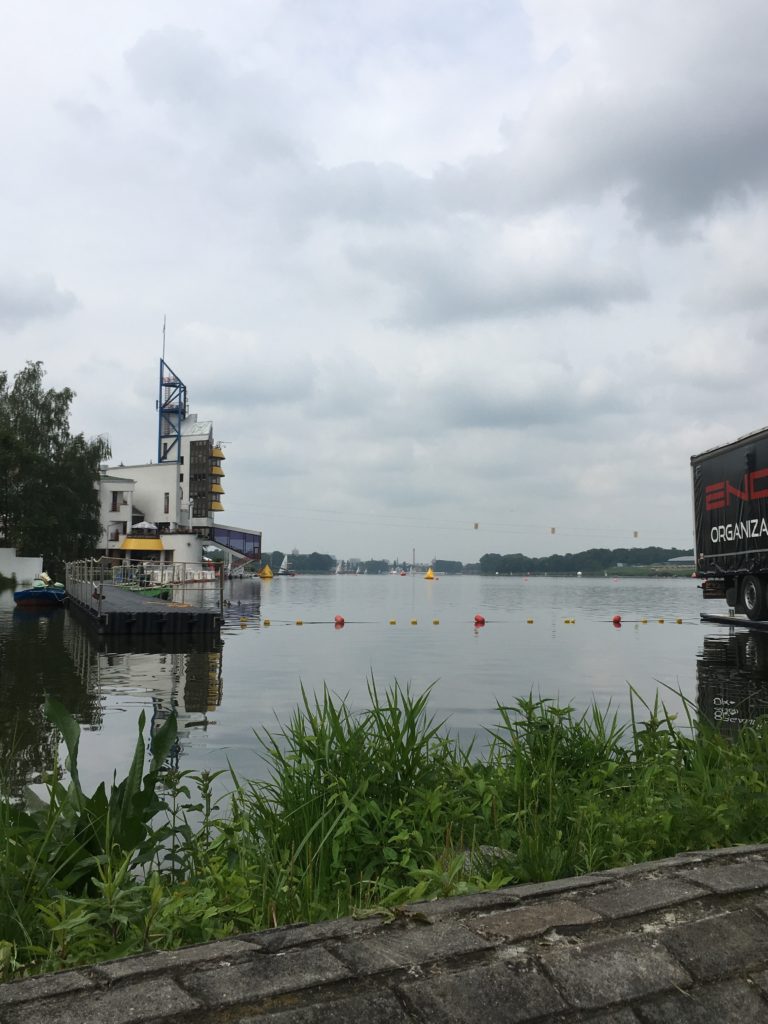 However it did give me chance to just again focus on me. Onto the bike and the legs felt pretty good, and I found a decent rhythm fairly quickly. Not knowing what the legs were going to do on the run I went with it on the bike, and found I was soon making progress through the field. I moved into the lead at about 65km, and continued to push ahead focusing on the process and not getting ahead of myself. The bike course was pretty fast. Again smooth roads and 2 laps, straight out and back. A very slight uphill into the wind on the way out, and so reverse on the way back. I hit T2 knowing I had put a few more minutes into the rest of the women. I tried to use the same strategy as Roth. Break the course down (which was quite easy to do on this course as well), but try to find good rhythm and form. It’s the second time in a race I’ve lead off the bike. The first was in Wanaka earlier this year, and I was caught at 10km into the marathon. I didn’t want this to happen today. I kept myself in the present, and just kept moving forward. I had no idea how far ahead I was, and the nature of the course gave you no opportunity to really see anyone else, as it was predominately a loop. This meant it was forward thinking and focus to just keep moving to the finish. Again not sure if the legs were going to keep with me or if at any moment they were going to say…”nope that’s enough. You’re an idiot!” 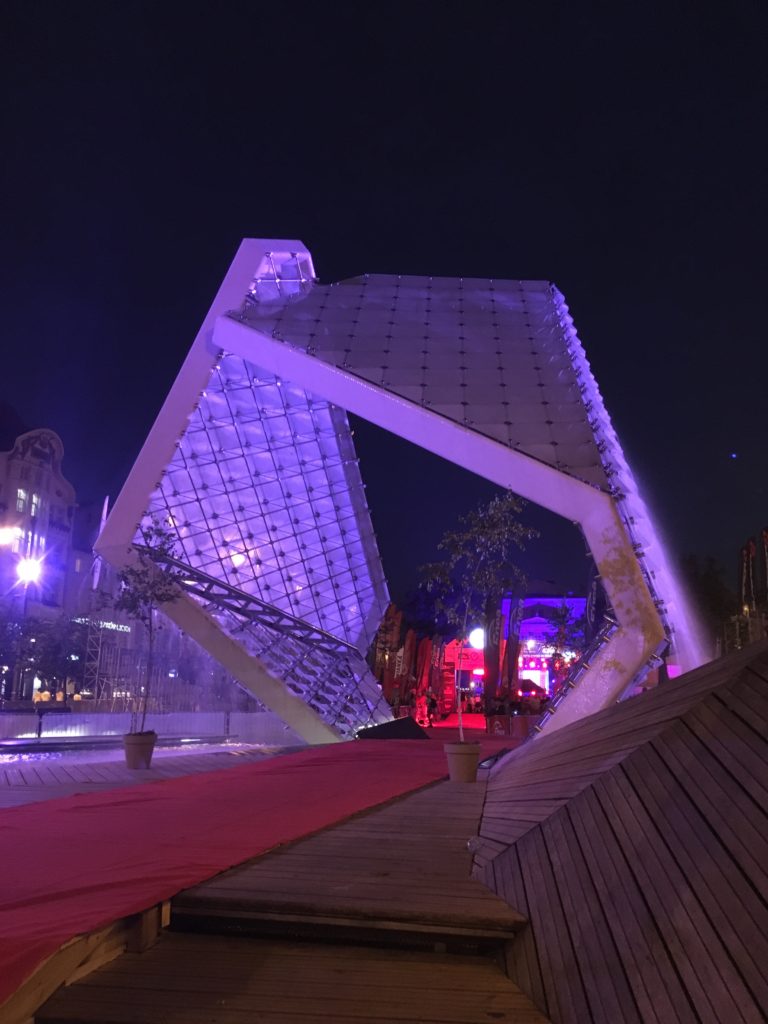 A pretty cool finish line, running under this water fountain/waterfall

The crowd were awesome! I had no idea what they were saying in Polish but I think it was encouragement! It was also cool to see all the GBR kit out on course from the ETU Long Course Championships. This helped keep me going and motivated, as well I hope my support to them kept them going as well during their marathon. I managed to get a split at about the 10km mark to say I had 2mins on 2nd and 3rd. Eek this wasn’t quite what I was hoping for. But then as we know, never trust a split! I think my biker meant 2km not 2mins as with 4km to go, it came through that 2nd and 3rd were running together and were 2km behind. I think I could half see them on the other side of the river at this point. I don’t think this changed anything in terms of what I did. I didn’t really want to change anything (speed, rhythm etc.), as I still wasn’t sure if the legs would tire up or what would happen if I changed my pace. 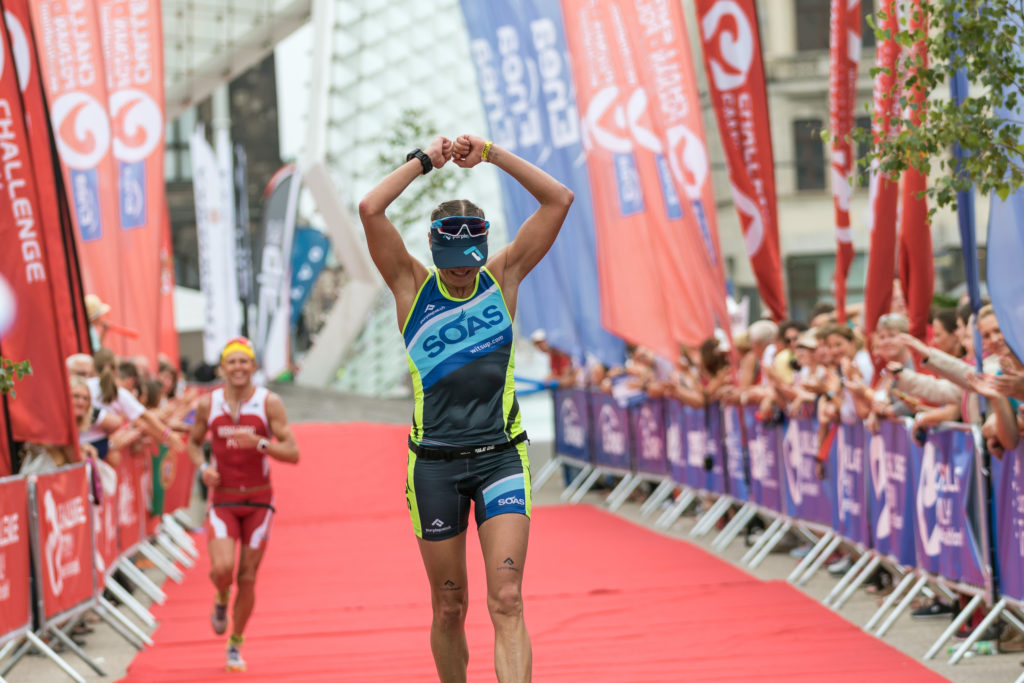 The last part of the run takes you through the old town square of Poznan, past all the café and restaurants with their tables on the square. Then a bit of a climb up to the finish, all on cobbles. Nice for the legs! The finish was pretty cool. We had to run through a water feature/fountain to get to the finish line. The only issue was the ramp to get up to this. I wasn’t sure if I would trip or cramp or actually make it up the ramp at all. One of those epic fails as you trip in front of everyone, about to take the win! All was good though and I could celebrate the final few meters, ready to take my first win as a Professional! Obviously the guys at the finish line were as surprised as me, as I’m not sure they were expecting me. Fortunately one of the announcers had been in Roth so was able to recognize me coming down the finish. However I’m not sure if there was meant to be a finish tape or not. That bit you dream about for the win, crossing the line and breaking the tape…well it didn’t happen but I still managed to celebrate as I crossed and make the most of it (full sequence of photos to come on Facebook). I found out after that my chip hadn’t registered all day, and so they had no information as to where I was, if I was in the race or anything! Not quite the finish I was dreaming about for my first Pro win, but still some good pictures to capture the feeling and hopefully I’ll make up for it, next time! 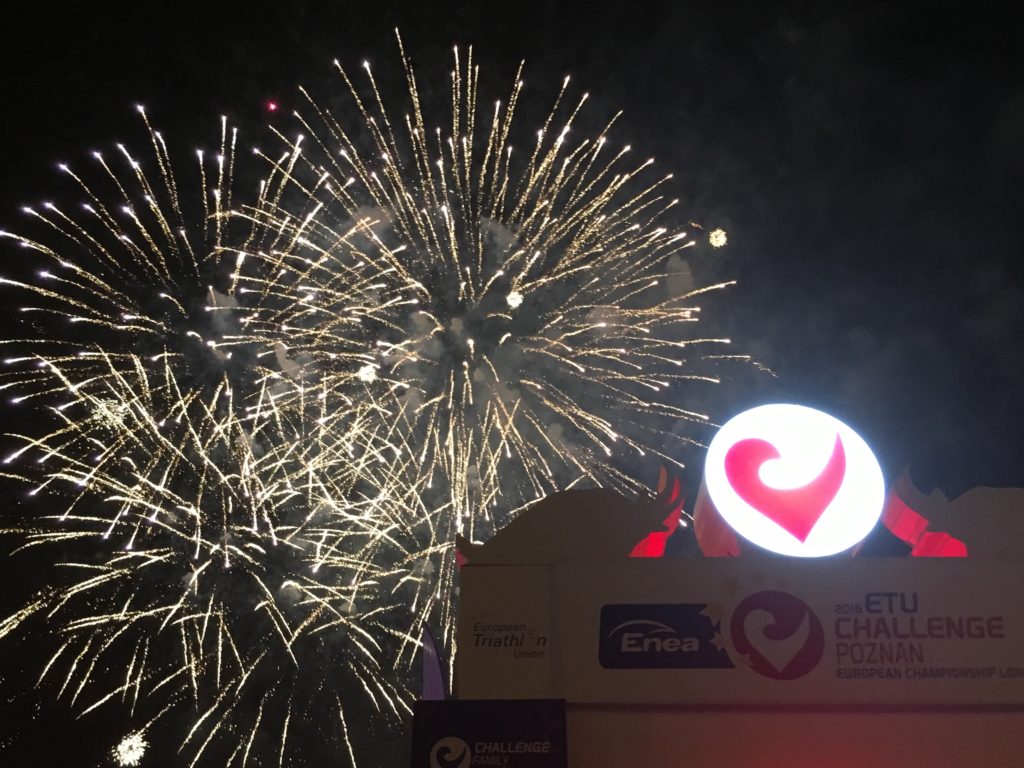 Another fantastic end to a race with fireworks

It’s really been quite a good 8days or so in Europe. I stared with breaking 9hours for the first time and making it to 6th on the all time British triathlete list. Then 7.5days later I get my first win as a Professional! I’m not sure it’s really sunk in. I’m hoping over the next few days I can start to let it realize, although I’ve already dissected both races several times and have my next motivation and goals, as I know from both these races that there’s some great learning and a lot more to come for sure! 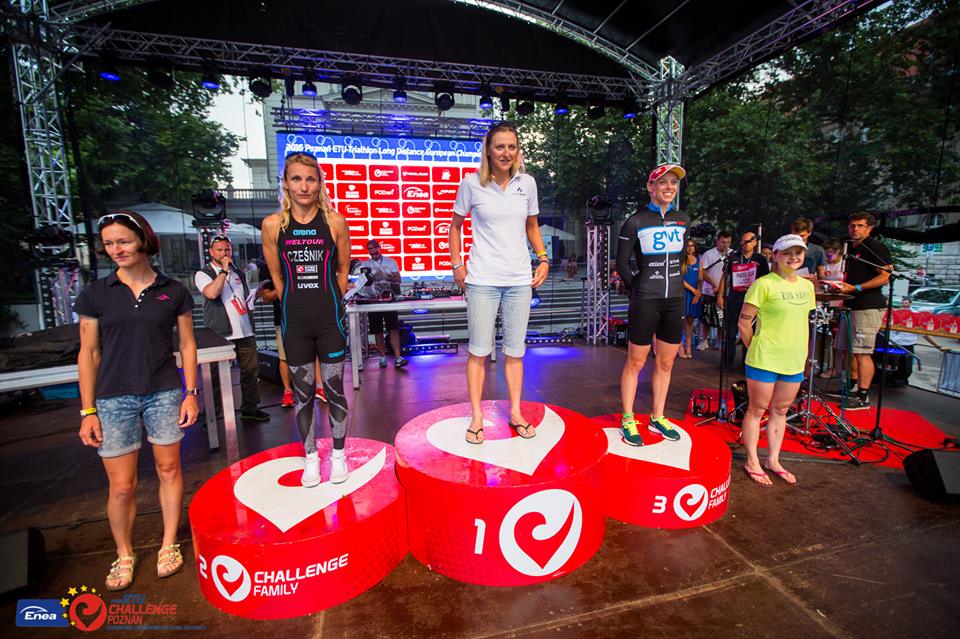 Again I have to thank the continued faith in me from Matt Dixon and Paul Buick. For once again getting a plan together that allowed me to recover but stay focused for Challenge Poznan after Challenge Roth. I’m excited about the next few months and onwards and what we can achieve.

To the Challenge Family for putting on two fantastic races in very special places that I’ve been fortunate to be part of. I love what the brand stands for and how incredibly welcoming and valued it makes everyone feel.

Thank you as always to the continued support from the brands I work with.

To the friends I’ve met around the world through this sport. Friends that I am fortunate to meet up with at the different races and then new friends as well, through homestay, the local community, other professionals and other age group athletes. This is what I love about the sport and I’m very grateful that I have this amazing opportunity. So to all those friends – thank you!

It’s always a little overwhelming to read all the messages on various forms of social media, post race and then as I put up blogs and reports. Knowing that there are so many of my friends watching and tracking me on race day and leaving messages is amazing. It really is. Thank you to all of you for the incredible support you constantly give me. Sometimes this sport and life can feel very lonely, but I’m always reminded of how many fabulous people I’ve met through this sport and being able to stay connected as I travel and race and I love every minute of the opportunity I have!