Ironman Malaysia, on the island of Langkawi, is definitely a truly unique experience and adventure. As destination races go, this should be added to the list.

What makes it so unique… 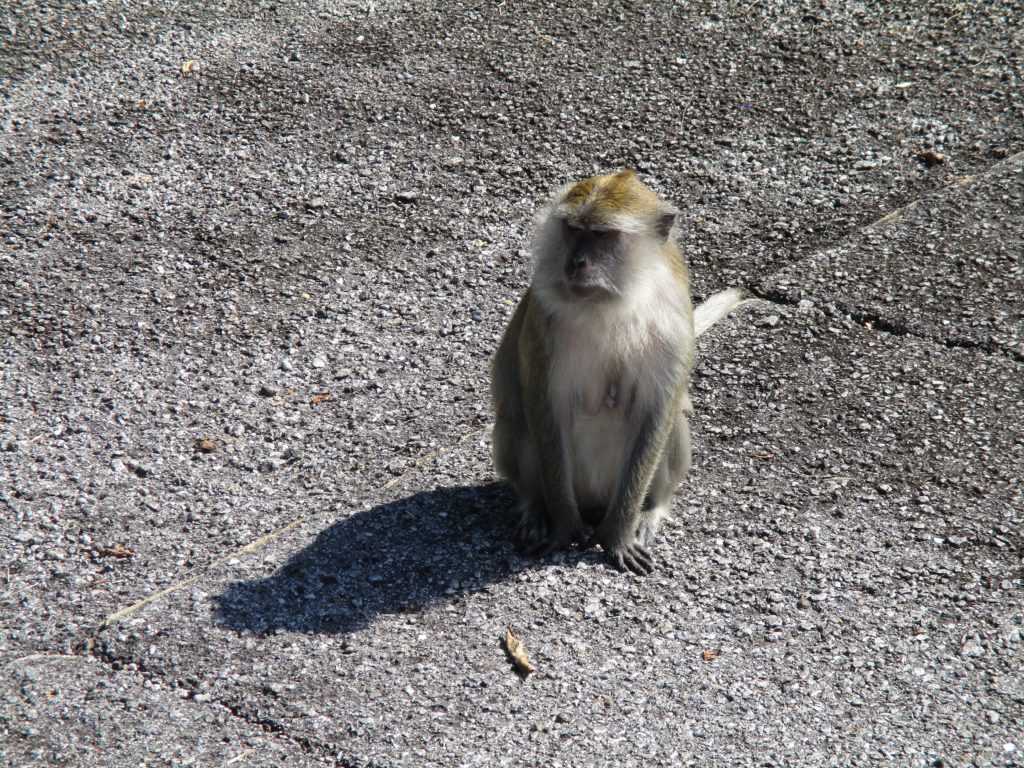 The conditions aren’t easy, the heat and humidity for sure add to the challenge, even the water temperature is warm, with it being a non wetsuit swim (~28deg). A two laps swim sees you coming out of the water and running 15m along the beach to re enter the lagoon for the second lap. The bike course takes athletes pretty much around the whole island, on 1 and ¾ laps, so you really get to see and appreciate the landscape. The roads are predominantly open, but don’t worry, there’s not huge amounts of traffic and all junctions and turns are well managed and marshaled. Part of the adventure is seeing the mopeds and scooters zipping about, or for some you find yourself over taking them! 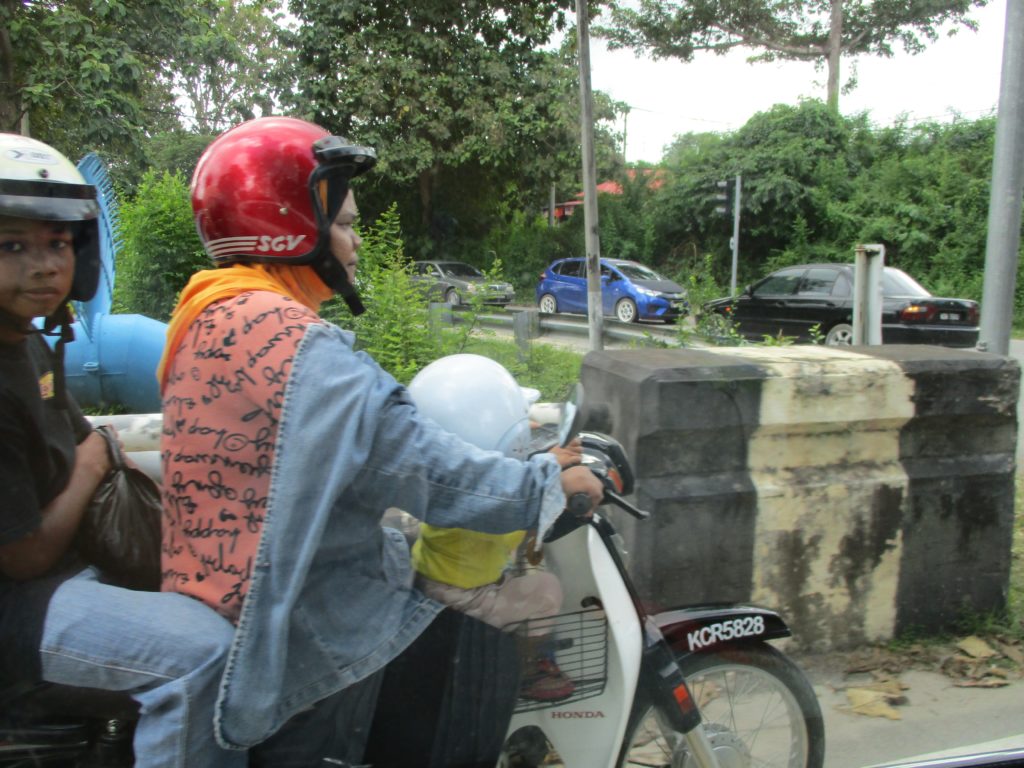 3 on a scooter is a common sight in Langkawi

The course is great though, a real mix of rolling hills, flats and some sharper pinch climbs that can really bite. The road surface is really pretty good so no worries there either. Along the bike course, you’ll see monkeys, dogs, chickens and water buffalo. Again most aren’t an issue at all, the dogs are pretty sedate and don’t venture onto the road, but it’s still something to be mindful of, and is pretty cool to see monkeys on the sides of the road (just don’t feed them). All along the course, as you pass through different villages and towns, the children line the streets holding out their hands for high fives! Unfortunately being on the bike makes it tricky to oblige but the sentiment was there. 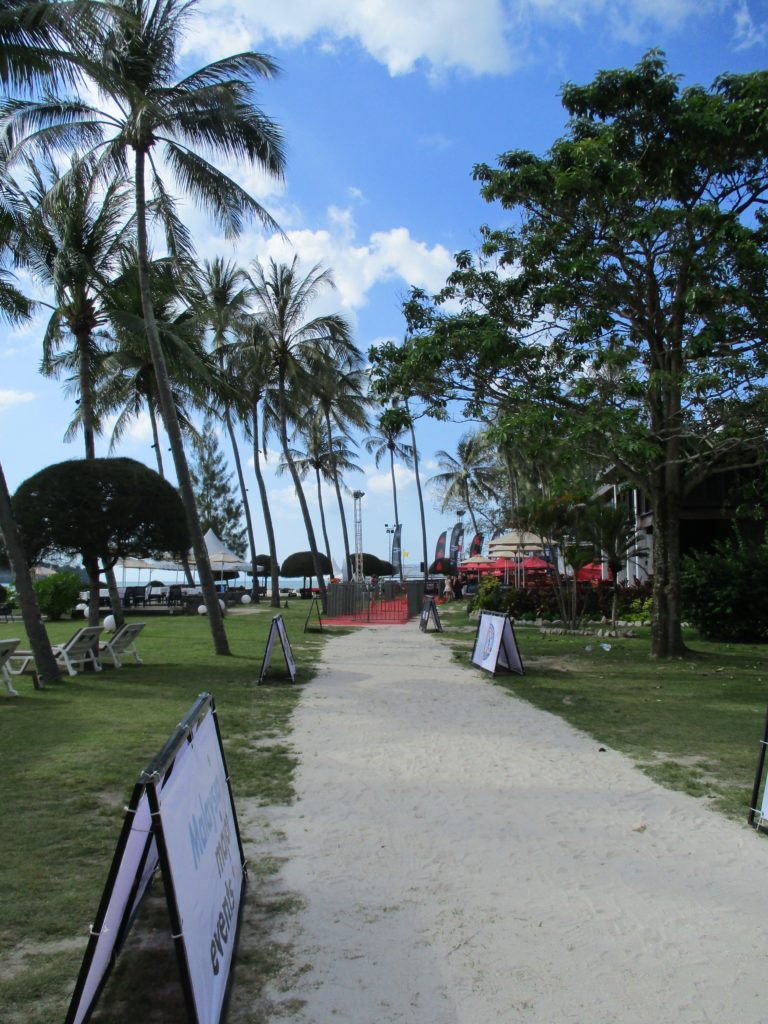 The run course through the grounds of the Meritus Pelangi Hotel

T2 is in a huge exhibition centre by the airport, so you are welcomed into an air-conditioned hanger, to change and compose yourself for the run. The turnaround is in this hanger so you actually run through the centre three times during the marathon. The run course is 2.5 loops, taking you from T2 to the finish, passing the finish to return back to T2 etc. It’s flat but exposed to the heat of the sun. However the aid stations are well equipped. At the beginning and end of each aid station there are huge baths, full of iced water, and loads of plastic pans floating, that you can grab and fill with the iced water and pour over your head. I actually saw one guy fully collapse backwards into one and submerge himself to cool off. The other very cool thing about the run course is that similar to the Queen K in Kona, once the sun goes down it’s pitch black. However unlike Kona, the Ironman Malaysia team park cars every 100m along the road, all angled at 45deg to the run course, so that when it’s dark, all the cars switch their headlights on to light up the way. I think this is a fantastic idea and something pretty simple and easy to do. The finish line is in the grounds of the Meritus Pelangi Hotel – so if you are able to get accommodation in here for the event, it’s certainly worth it from the very short shuffle home post race. 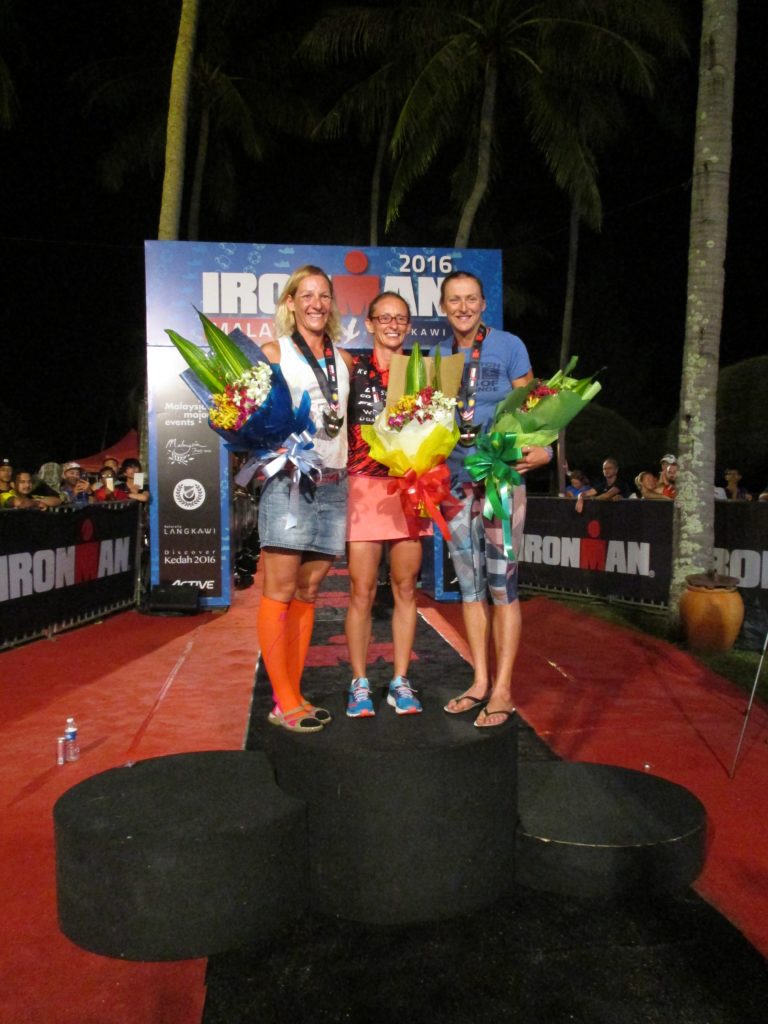 As for my race, I secured another podium for the season with third place so positive about that. It wasn’t the podium position I’d wanted or had felt was in my capabilities, but Diana Reisler had a fantastic race to claim the three peak, and maintain her Queen of Langkawi crown, and it was well deserved. The short summary, I missed the front pack (3 women) in the swim, and was about 20m behind them for much of the first lap just unable to bridge back up. I was hoping during the beach run I could make the gap, but they did pull away in the last 500m or so before the beach section. So by my standards I had a pretty pour swim putting me a few minutes down from the leaders. These days in racing, often a few minutes down in the swim, actually turns out to be more impactful, as was the case in my race. Onto the bike and I’d had a lot of warnings about managing the bike due to the conditions that would come back to bite you on the run. The plan was to ride hard, however I feel in hindsight that the scare mongering re the conditions possible slightly dampened my output and subconsciously affected me more than I should have let it. Again it was a solid bike, but for me nothing special compared to what we know I can bike, and whilst I’d moved from 4th up to 2nd within the first 10km of the ride, without any specific efforts, I’d failed to make any inroads into the leader, in fact losing a few more minutes over the 180km. Looking back the numbers on the bike leading up to the race, they hadn’t been the same as what I’d been achieving leading into some of my other races over the year, however I still feel I should have been able to put in a decent ride. It was a solid effort but again didn’t quite hit the mark. 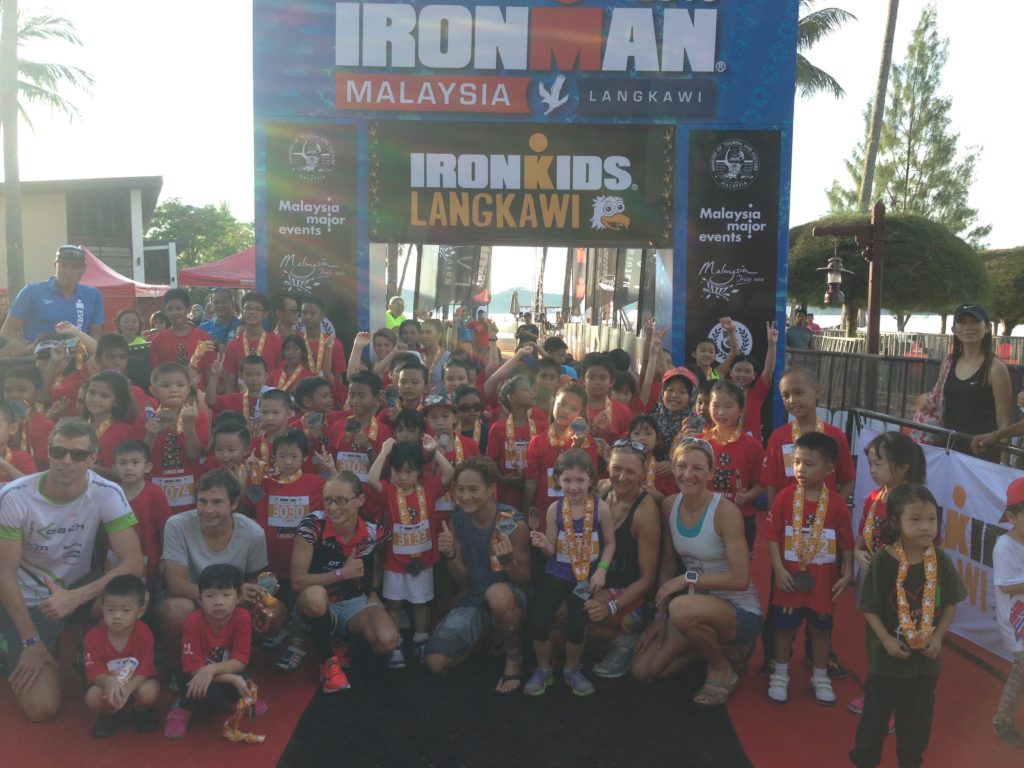 Great morning with the Ironkids!

Coming off the bike, I was about 6mins down from the lead, and felt this was totally achievable by just settling in to my run and tapping away. I really can’t pin point why I didn’t execute the run, and ended up slipping to 3rd at about 25km. Yes it was hot, but I’m not sure whether it was that or just the body not fully functioning on the day, as I struggled to find that rhythm. The run was probably the most disappointing part of the day. Running has been going in the right direction we feel, so it was frustrating to not be able to show and execute that.

All in all it’s another podium in the bank and we’ll move on from there to the next race.

Sadly they have announced that this year was the last for Ironman Malaysia. I know however that Ironman were working hard this past week to discuss and have the negotiations with the Malaysian government. I really hope, having experienced the event and the race, that they find a way to proceed with this race in the future, not just for the athletes but for the local community. Seeing the support from the Langkawi residents and the boost in their businesses and economy can only be a positive for the locals.

Keep an eye out for my blog from my few days post race spent with The Rotary Club of Langkawi and The Charity Club of Langkawi, working with some local schools. It was a great way to put into perspective my race performance and feelings! Watch this space…. 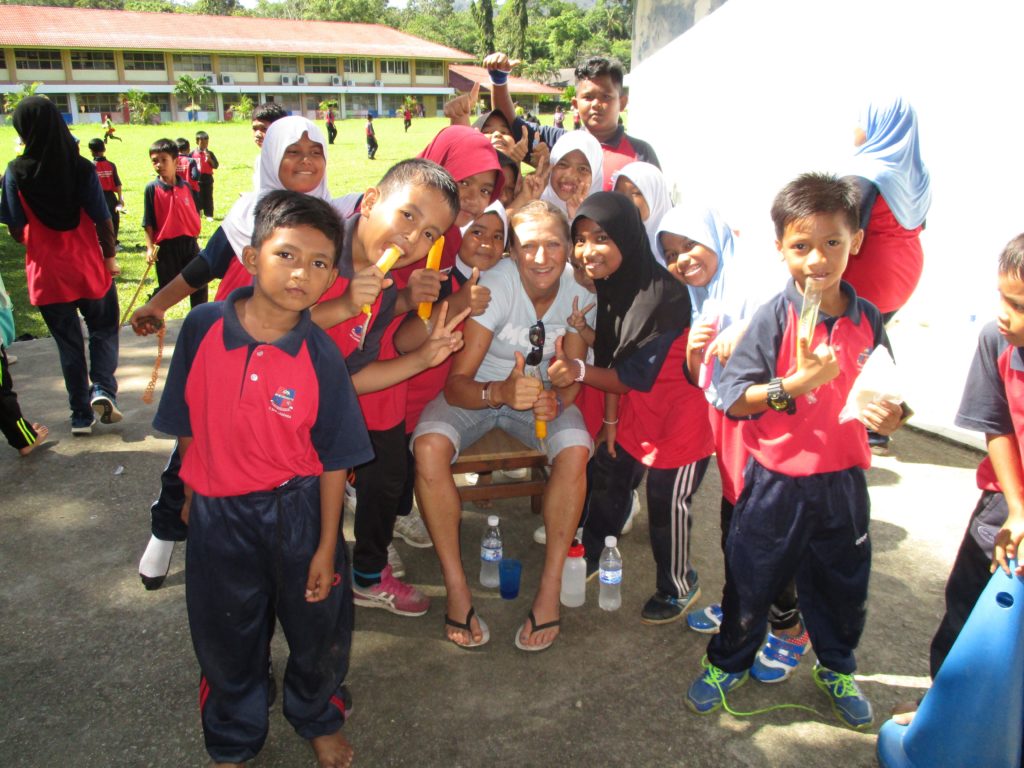 Do MORE… MORE Than Sport in Langkawi