Sometimes you just have to leap…then flap your wings like crazy!

As I write this now, a week ago I was about to board a plane to Melbourne. Just a few hours earlier I was out on a four hour ride in the Christchurch Port Hills. I was enjoying being out and about on the bike. The previous day, the weather had been feral but Friday was gorgeous blue skies and sunshine, with a crisp freshness of Autumn. It was such a fabulous day, I stopped for a quick coffee in Lyttelton, not quite on the training plan, but sometimes you just have to stop and soak it all in. As you do, checked my phone briefly, and read a couple of messages. The night before the idea of racing Challenge Melbourne had been floated, but I dismissed it as far too late in the day. It was Thursday night, I was in New Zealand the race was Sunday in Australia. The messages on my phone were just checking again…was I sure I didn’t want to race? 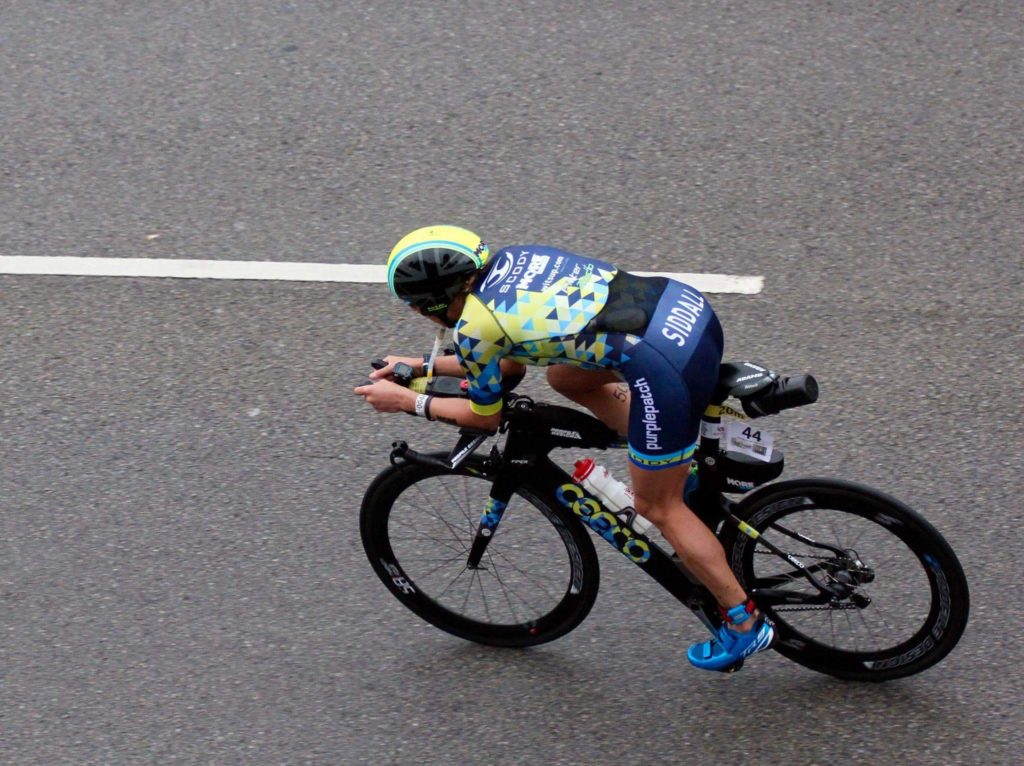 I spent the rest of my ride flipping between, “F*&k it! I’ll go!”, to “don’t be so stupid, it’s Friday”, back to “what the hell, why not?” then to “you’re on a four hour ride in the hills”! I then started going, “OK if I do go, do I still ride for four hours, or do I cut the ride short and save some of the legs?”. But then, if I cut my ride short and don’t end up going, I’d feel bad for ‘skimping’ on my training and prep for the weekend. Oh the turmoil! Ha ha! I compromised, and rode the last hour of my ride on the flats, with a longer flush and spinning. 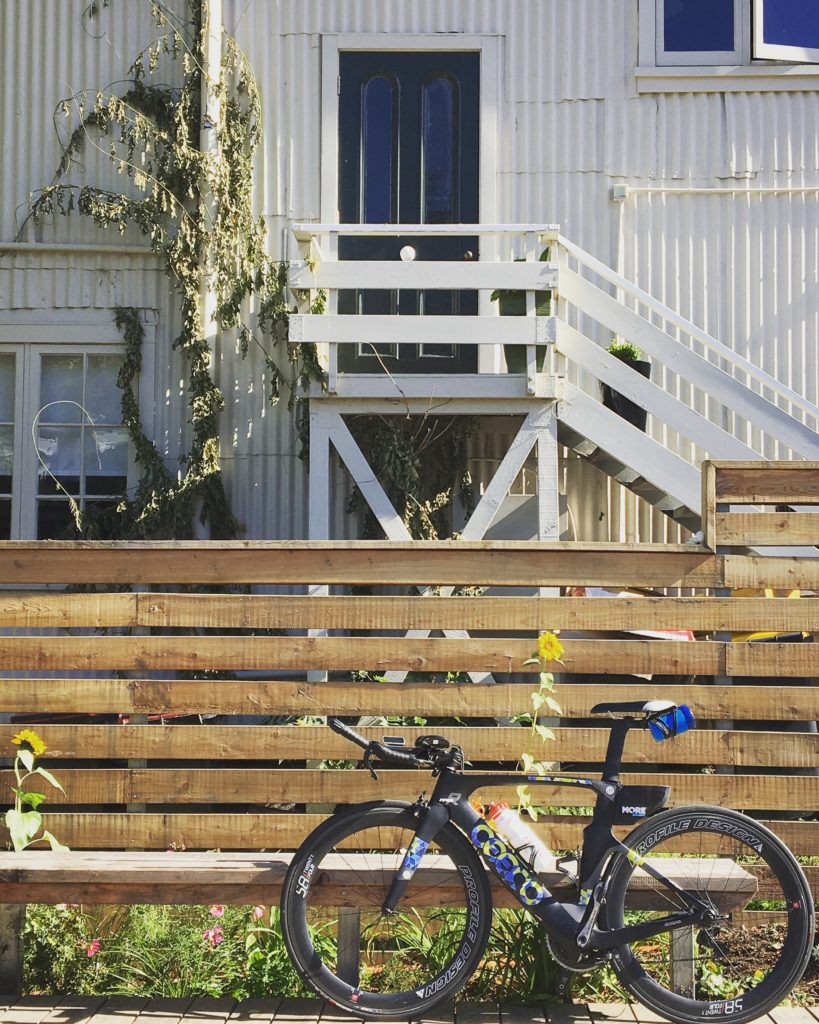 Enjoying my Friday ride in the Christchurch hills

Friday 1400hours – (sorry still military time on that front), and Paul Buick, our Purplepatch bike coach, came over to check a few things on my bike. I’d only been back about 30mins, but I had had time to check if there were flights, just in case…

I’ll spare you the detail of the conversation with Paul, but the implication was that, it wasn’t going to negatively impact me and the next bit of training, if I went and raced. I think this was the confirmation I needed. (Actually I needed him just to say “Yes” or “No”, black or white, rather than all this…chat trying to get me to find the answer myself, and ‘what does your gut tell you (it tells me I’ve not eaten since finishing my ride), and ‘what sort of athlete do you want to be’, blah blah blah… Ha ha! (But knowing Paul, I knew what he’d be doing if in my situation. He’d also already looks at flights!)

What then happened was a text to Matt Dixon in San Francisco. To be honest, it was now just before 1500hrs (in NZ) and I wasn’t even sure Matt would respond. My text, something like… “Thinking about doing Melbourne. There’s a flight this evening, and back Sunday evening. Just go last minute (no shit*) and see what happens…” (*I didn’t actually say ‘no shit’)

Matt responded pretty much straight away, similar chat… “what’s in your gut” (still hungry)…“once you jump you have to flap your wings. You cannot look back at the edge”, and ”can you step up”….

“You have 60seconds to decide. Or I make the decision” (Me: Actually that’s tempting!)

Anyway… the long and the short of it… a few minutes later I was back on the Qantas site, checking the flights were still available. A quick call to Belinda Granger, the Challenge Family Pro Liaison, to check it was all still ok, and then I pressed ‘go’ on the tickets. 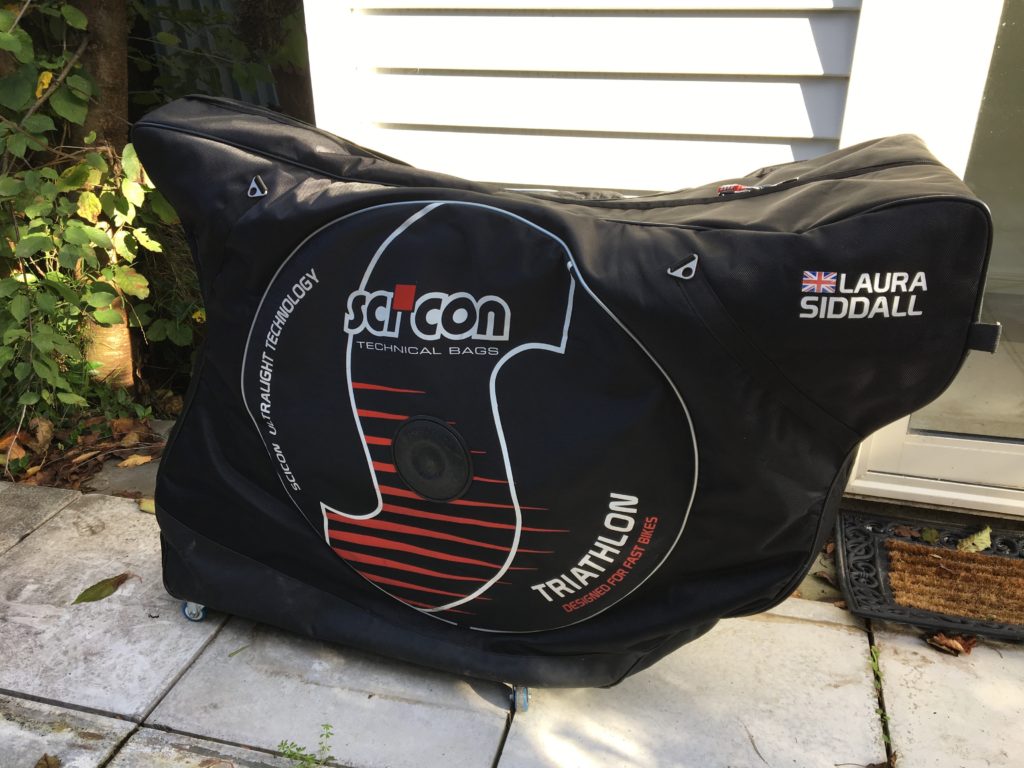 Good job the Scicon bags are easy and more importantly quick to pack!

So at 1500hours I booked my flight, and two hours later, at 1700hours I was getting picked up to go to the airport! (Thank you Nadine.)

I was in Melbourne for about 48hours, but I can say that I’m incredibly happy I made the leap and had the opportunity to race Challenge Melbourne, which was also the Challenge Asia Pacific Championships. It’s a great event, incredibly well run and in a awesome location! (One to add to the list for sure.)

The details of the actual race are kind of irrelevant in this blog…but here’s the very short of it. 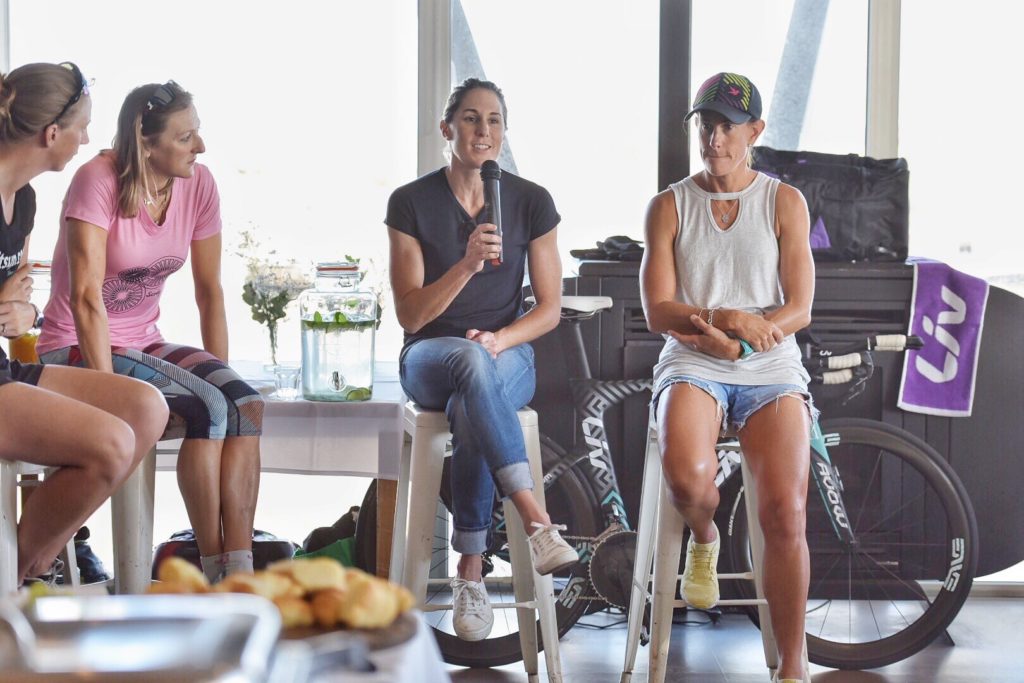 Sunday – a mild clear starry morning. Hmmmmm…where is this horrific weather? Somewhat feeling I was being lured into a false sense of security. Down to rack the bike and all is still OK. Then the lightening started…and the thunder and the temperature dropped. The race was delayed about 10-15mins due to the lightening (not complaining about that), but then we got the all clear. Swim was in the bay at St. Kilda in Melbourne, and the course took us under the pier, which was pretty cool. Swim was just a little bit choppy! Bike was on closed roads on the infamous Beach Road. Flat three loop course, but with the roads closed it was great and plenty of room for overtaking. First lap was dry from what I remember, second lap rainy and the wind picked up quite a bit! I didn’t find it too bad to be honest, in terms of the gusts, yes head wind is always fun, but the gusts were manageable. (Raced with Profile Design 78 / 58 24series wheels.) It was interesting watching some athletes handle the gust coming off the ocean, sweeping them sideways, it didn’t look that much fun. Third lap was much the same. 20m drafting for the Pros too. Hats of to Challenge for this! The run was two laps along the water front and back, which was again also pretty fab. First lap was ok (weather wise), second lap, started to rain pretty heavily, yet by the time I finished it was almost blue sky, almost! 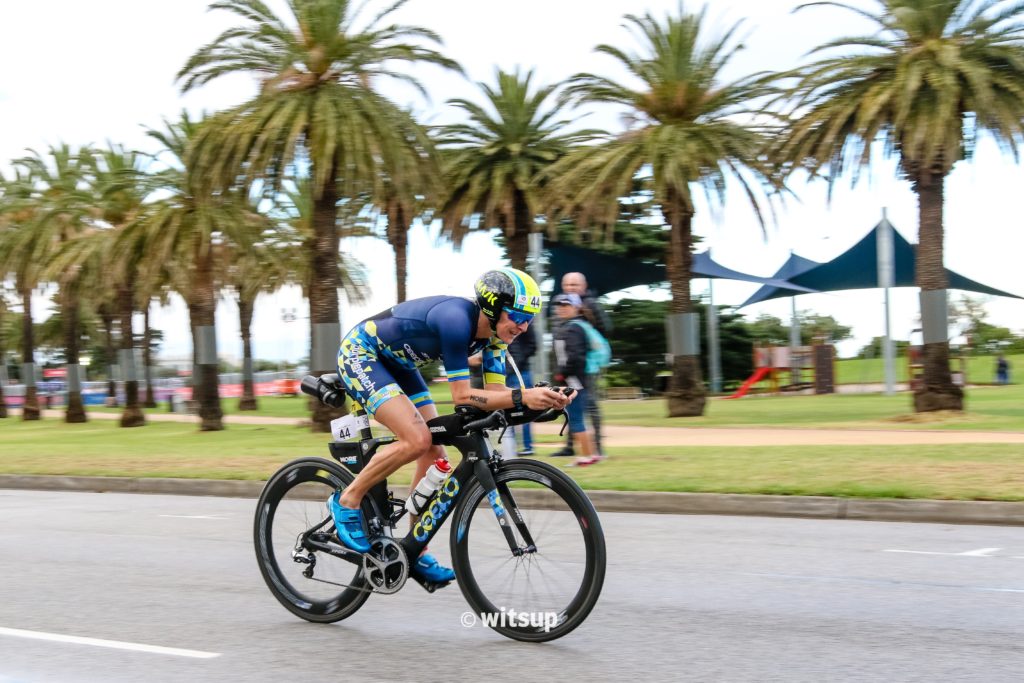 I am still so happy with my Ceepo bike and Scody kit! (Photo cred. Witsup.com)

My race: Swim – OK. Started well. Fell asleep or mentally went MIA, probably between 1.2-1.4km, and woke up again for the last 500m. Bike – due to the last minute travel, my bike legs unfortunately didn’t make the flight and stayed in Christchurch. Probably more an full distance effort (if that) than anything else but some good things to take away from it still, so still worth it. Run – pretty solid and felt strong throughout. Found and held good rhythm quickly, and felt strong still at the end. Positives for moving forward now.

Yes I would have liked to have given Annabel Luxford more of a run for her money (yes literally), but she’s so speedy and classy over this distance, and was far superior on the day. Congrats Bella on another win! 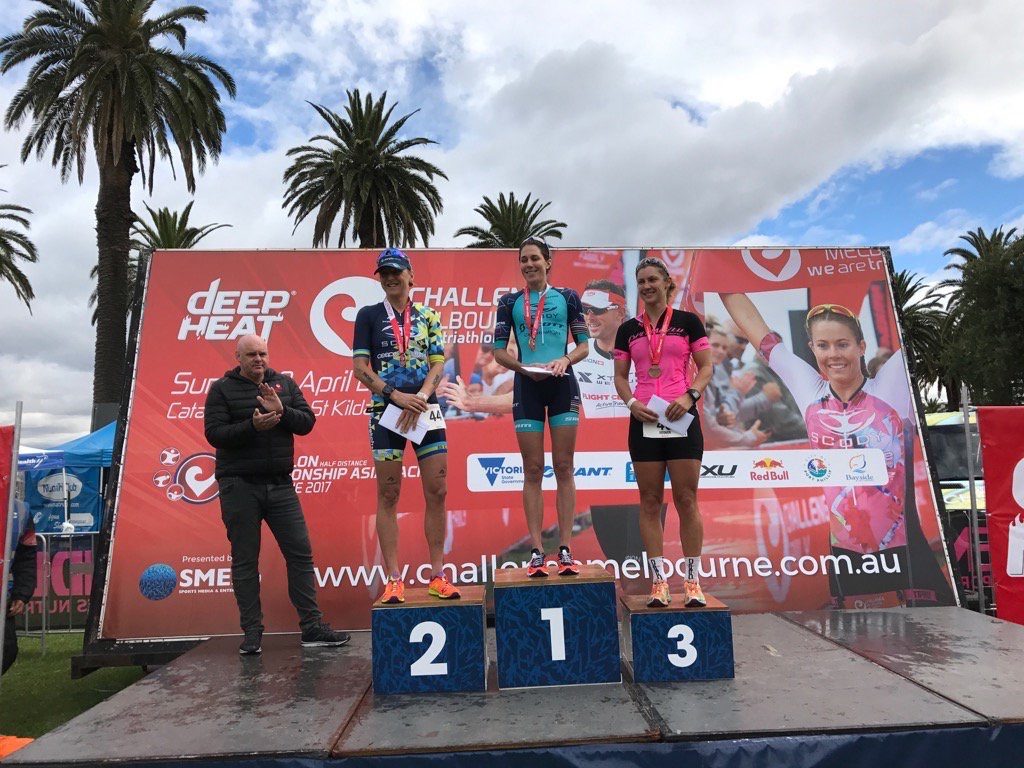 Sharing the podium with Annabel Luxford and Penny Hoskins – Congrats. A nice little Scody 1-2 as well! (Also sharing the stage with Ellie Salthouse!)

But I didn’t really want to go into the details of my race (OK too late on that). This was more about doing something outside my comfort zone. I’m a planner (I’m an Engineer), I like structure and lists and plans and writing everything down and having it straight. Getting on a plane last minute and going to race is not something I would normally do. 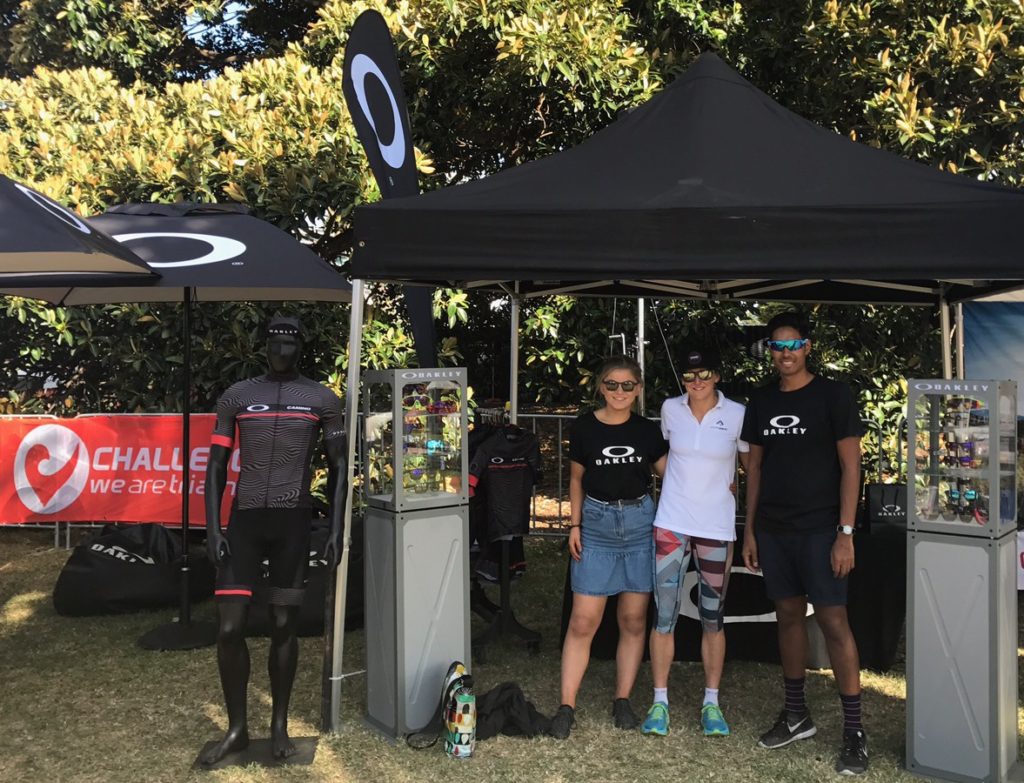 Great to catch up with the Oakley team.

Now if it was just a weekend away in Melbourne, drinking coffee and catching up with friend (as one of my friends actually thought that was what I meant when I text her saying…Last minute decision I’m off to Melbourne see you Monday), then yes, I’d probably do it and like the spontaneity. But to race was different. But that’s what was intriguing and exciting about it. As much as I am pretty boring in life, and like my structure, I do have a flip side that sometimes shows, when I do just go…f*&k it! And it was this side of me, that perhaps hasn’t surfaced of late, that was nagging. Something was drawing me to the edge, drawing me to just take that leap. I think what I was looking for from Matt and Paul, was just a confirmation that it wasn’t ridiculously stupid, and as previously said, wasn’t going to be a negative impact going forward. If they’d had said, “no, it’s a bad idea in the big picture of things for the coming season”, then I’d have totally gone with it. But because they left a slither of the door ajar, I was able to take a chance. If I had a bad day in Melbourne, it would have been a long training day and still banked in the big scheme of things, but if it was a decent or good day, then there were lots of positives to take away. Let’s make it clear too, I wasn’t going there just to have a training day, I was all in and going to race. 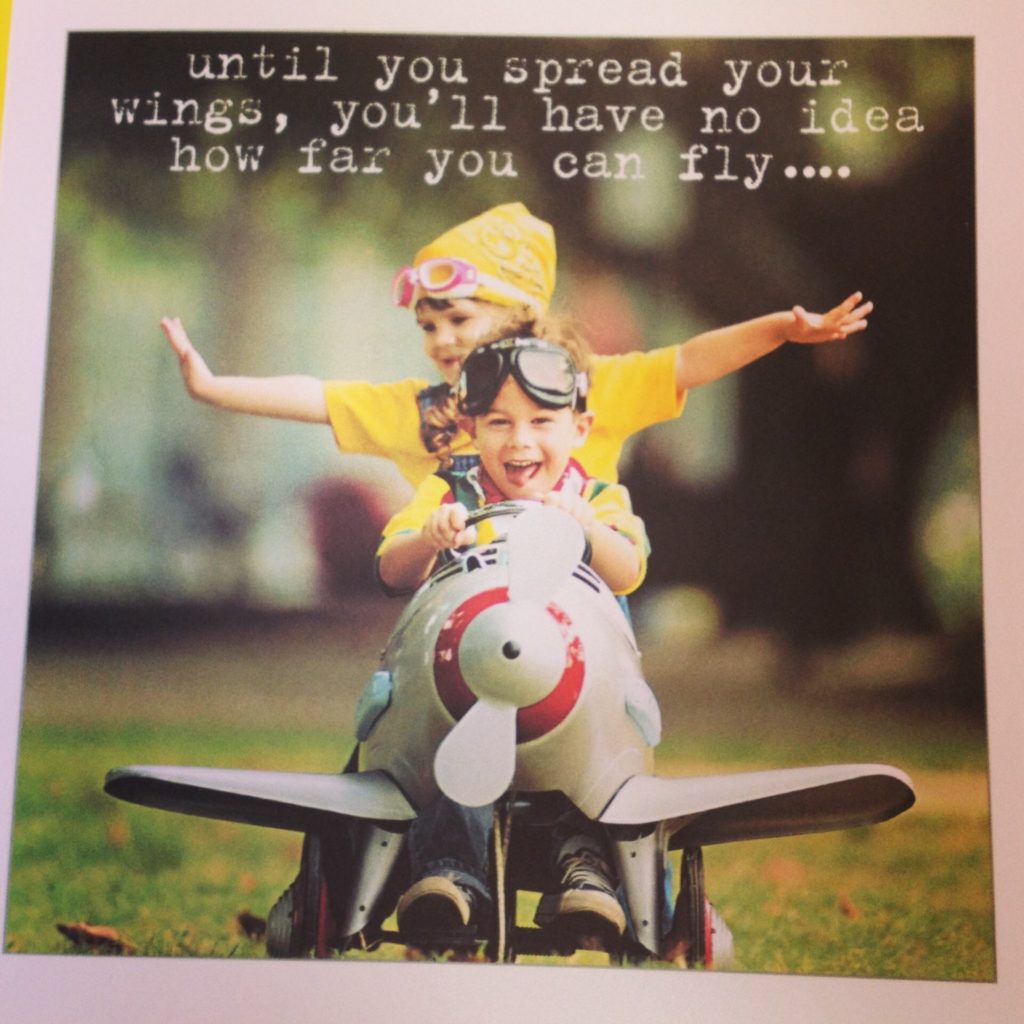 A good friend gave me this card as I headed off to San Francisco, to become a Professional Triathlete… it seemed appropriate for this weekend as well.

Also, as an aside, and I debated whether to add this in here or not, whilst I’m not in this sport for the money (because we all now it’s such a lucrative industry), race winnings (and sponsor bonus, as a result) are currently my sole source of income*, and so it was an opportunity, if a decent day to earn a little more. (*Yes it’s risky to solely rely on race winnings as your income and if I had a choice, it wouldn’t be that way, but for the moment it’s the current reality.)

I do this sport to push my limits, to develop and improve and to see how far we can get. I’ve probably played it safe far too much, and I can play it safe, still learning but perhaps, never knowing. Or I can take a chance, take a risk, and take a leap. Yes there were risks of going to race and trying to step up, with no specific prep or focus, but if I didn’t go or hadn’t have gone and just seen what would happen, then I’d be none the wiser. I’d never know either way. I’d had missed an opportunity to learn.

As I tweeted out on Friday as I boarded the plane… “Until you spread your wings, you’ll have no idea how far you can fly…”

So I like the number 2! – Ironman New Zealand Race Rap