Hola! Buenos Dias! I’m in Europe (Spain to be exact) and it’s fab! I’d forgotten how fantastic Europe was. I have so many childhood memories flooding back to me with the early morning smell of croissants, and the cobbled streets and town squares lined with cafes and restaurants, the ice cream, the sunshine, the weather. In fact so many childhood memories from the holidays we used to take as a family (camping in Europe), that I’m struggling to remember I’m here training and racing and so working, and not on holiday! The struggle is real! 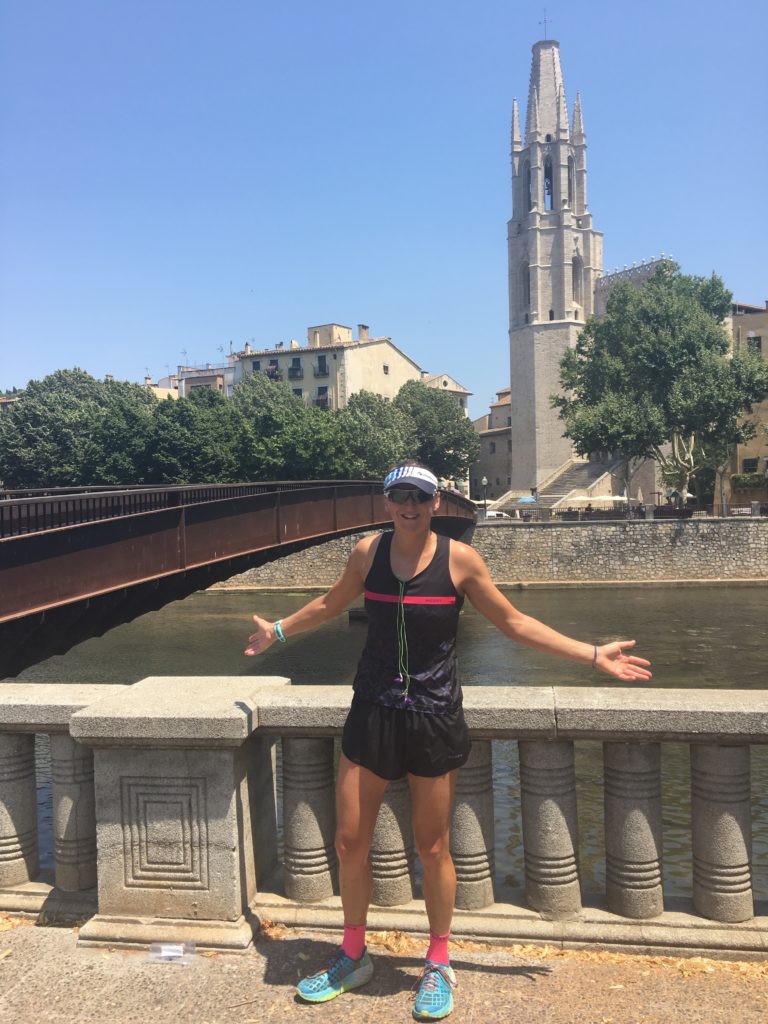 If you want to catch up more on my European Adventures check out the latest few Fitter Radio Podcasts, with my Sid Talks segment (links below). It was listening to the latest episode* that I had a pinch myself moment. Beven Mckinnon (Fitter Radio head honcho) was chatting to Mikki and just said… “I’m so jealous of Sid and where she gets to on her adventures”. It just caught me for a moment and I took a step back to be truly grateful for the life I have. Yes the travel, and particularly travelling solo (more on that in a future blog) do get to you sometimes, and your views can sometimes get clouded by that. But I’m here in Girona, in Spain and it’s awesome and I need to remember that and smile!

(*yes I listen to my own podcasts. it’s learning thing, to find out what I sound like and if there’s anything I repeat too much or words I use to often, and how I can improve next time. I also listen to the other great interviews on the podcast.) 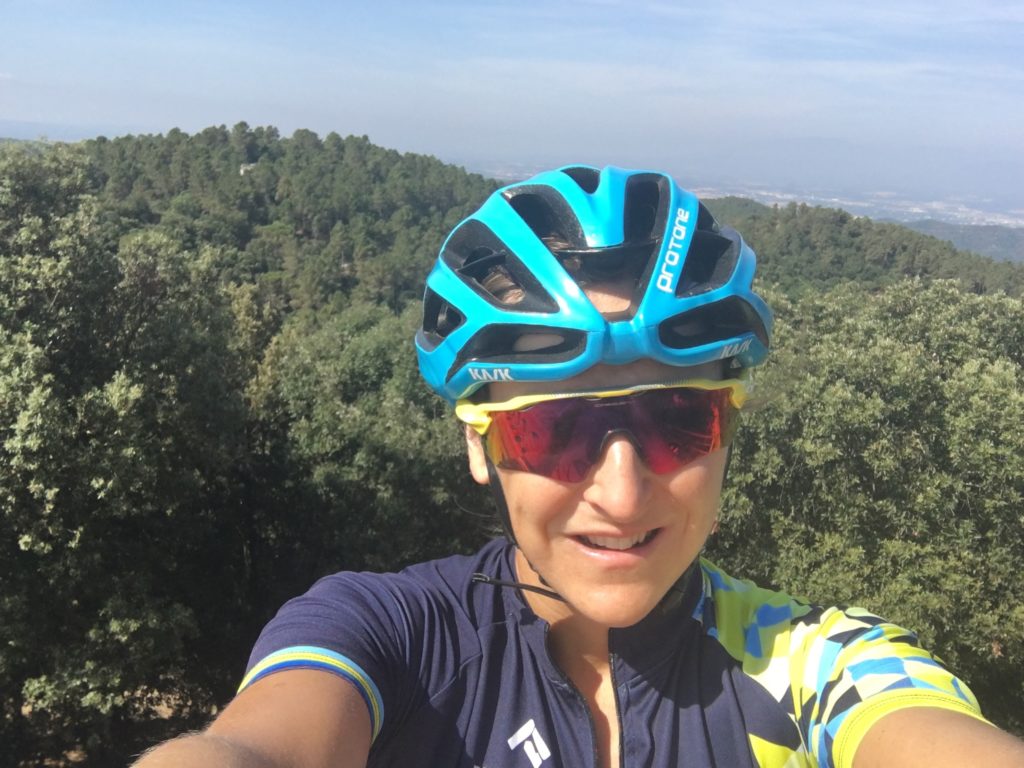 Els Angels Climb (p.s. My Scody race and cycle kit will be available for sale soon with 10% going to MORE Than Sport.)

One thing that isn’t clouded here in Girona this past two weeks, is the sky. It’s been blue sky and sunshine and somewhere in the mid to high 30s. Amazing! Girona is in Northern Spain, in the Catalan region, so whilst I’ve been trying to learn Spanish, to at least attempt a few words (it’s a language I always wished I could have learnt), it’s actually not helping that much as they speak Catalan! (I was also never really any good at languages.) However Girona is renowned for it’s cycling and there’s such a cycling presence here, but in a very European feel mixed in with the cafes and culture. 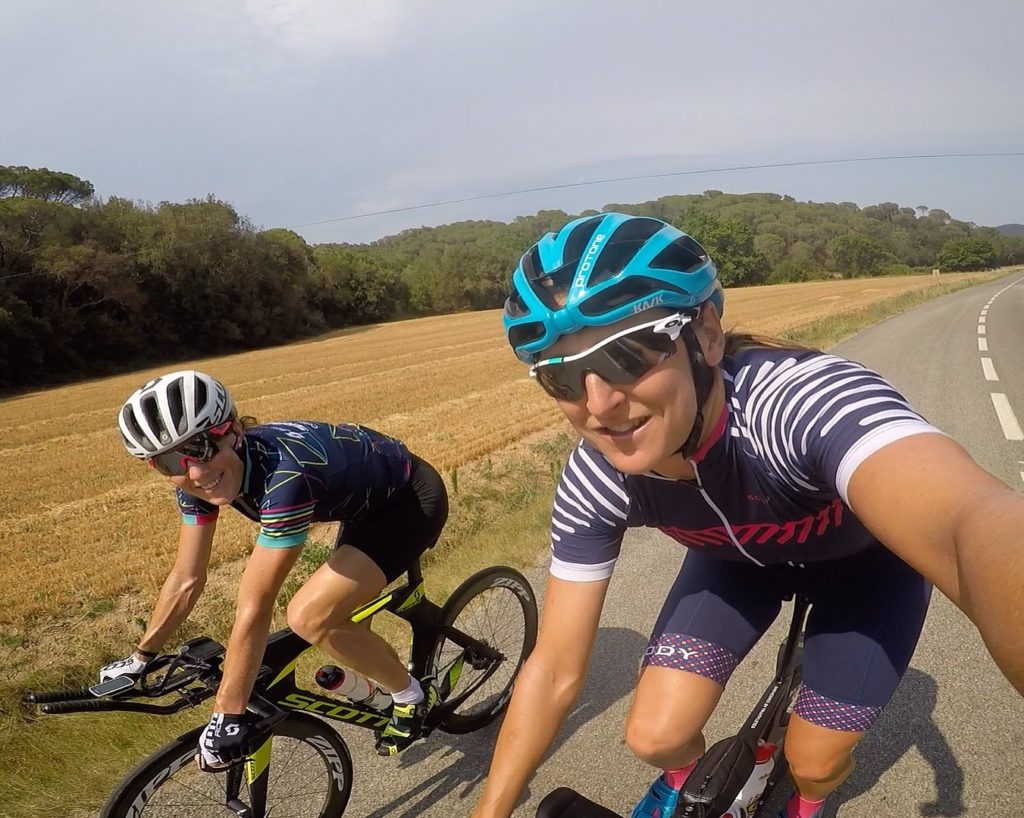 It’s always a bit of an adventure finding your way about on the routes to ride and run. I’ve been using a mix of downloading routes sent from contacts to my Garmin Edge and following them, to mapping my own or to just heading off and exploring the roads. There are so many options I’m only just scratching the surface I’m sure. It’s also interesting as when riding on roads you’re not familiar with, knowing when you actually may come across a water stop to refill. Let alone if the shop or café will actually be open. It’s Spain, and they seem to have their own agenda and are quite random on whether they are open or not regardless of the time of day. 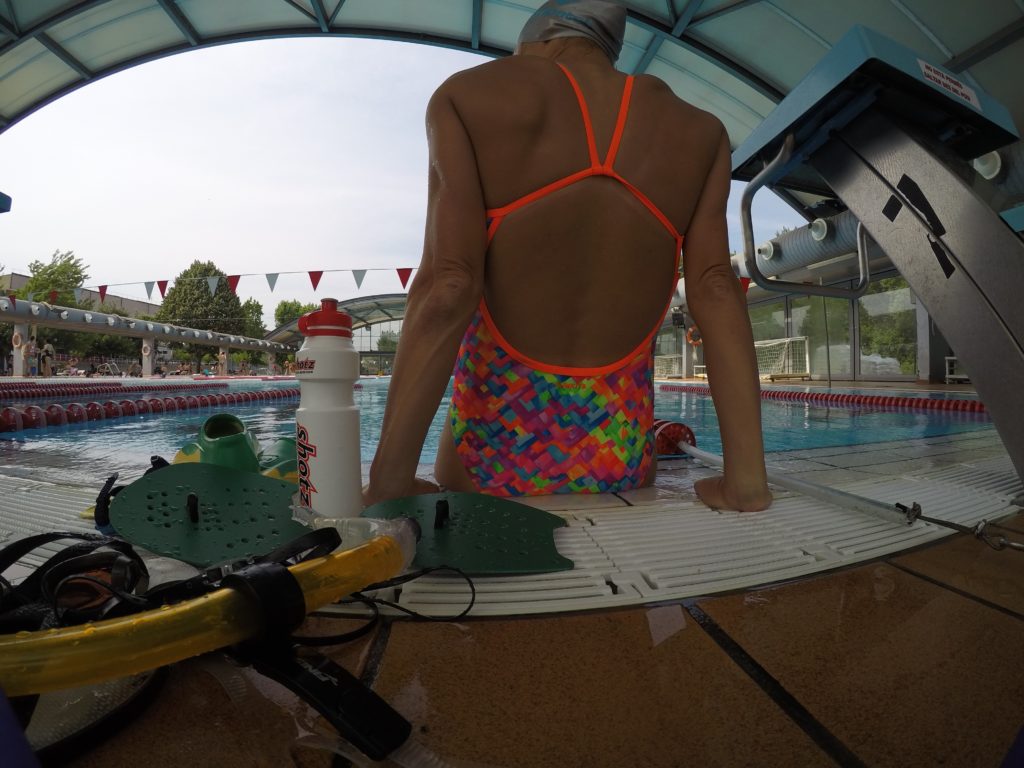 Pool Sessions are much better when the pool is like this and I have my Funkita’s!

Again with the running, I’m likely not even getting close to finding the best places, as if I have a specific interval session to do, I’ve just run loops that I’ve found, and know I can refill with water, or know I can just focus on the run and form rather than navigation. However there are so many trials to explore and tracks to run on. I’ll have to come back.

For swimming, I’ve managed to get a month pass to a great 50m outdoor pool just a 5min walk from my apartment (which is in the Old Town of Girona). It was a little bit of a shock to be in a 50m pool again, and probably with a combination of coming off some races (more below) it felt more like it was 60m at the start!

So that’s Girona, but what has been happening before now, since Ironman Australia. 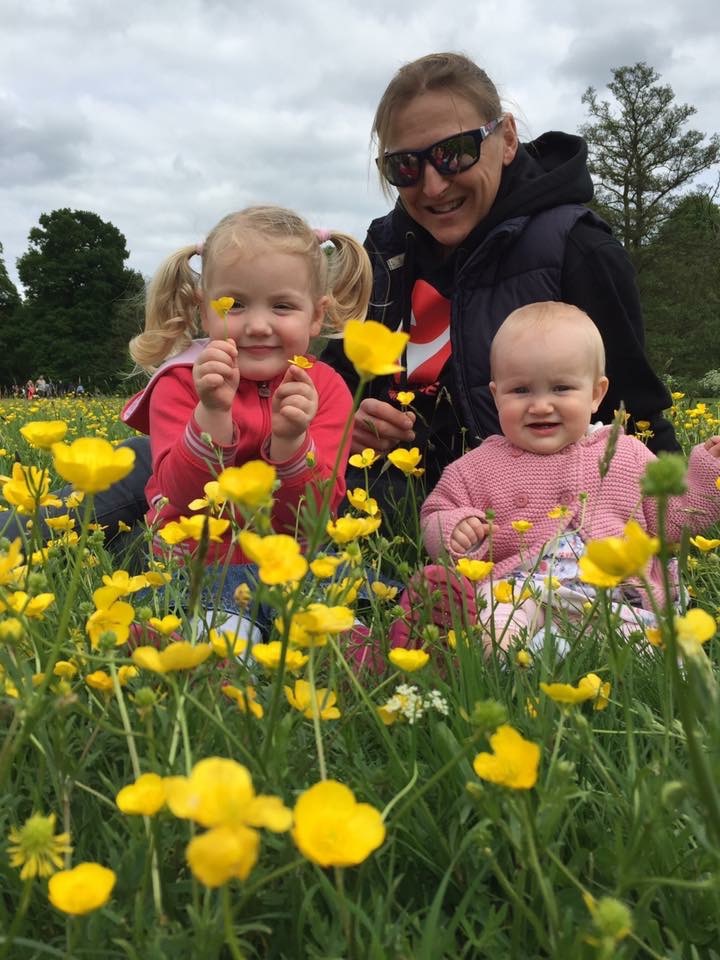 Loving the time spent with my family back in the UK

I relocated to the Northern Hemisphere, packing up in New Zealand with a few days in San Francisco to catch up with Matt, before landing in the UK and spending some time with my family. There was probably more travel and disruption than was ideal (but that’s the sort of thing I do), and as much as I love seeing my family (it had been a year since I’d last seen them all), I often find the training hard when I’m at home in the UK, particularly with the limited swimming options. Also just I get torn between spending time with my family and remembering I still have a job and still need to be training. It’s almost a case of saying that I have to go to work between these hours, much like you would a corporate job, and then catch up with people outside of that. But it’s something I feel hard with sport and something I’m still trying to get my head around and get used to, especially when you don’t see your family very often and want to make the most of all the time you can with them.

The Northern Hemisphere was all about summer racing in Europe. I’m really excited to be an ambassador for Challenge Family for the European series of races.

So I’m now two races down and five countries in, having raced The Championship in Slovakia, and Challenge Herning in Denmark (via airports in Austria and France) and I’m now in Spain.

With the two races just one week apart I can really say, what a difference a week makes. 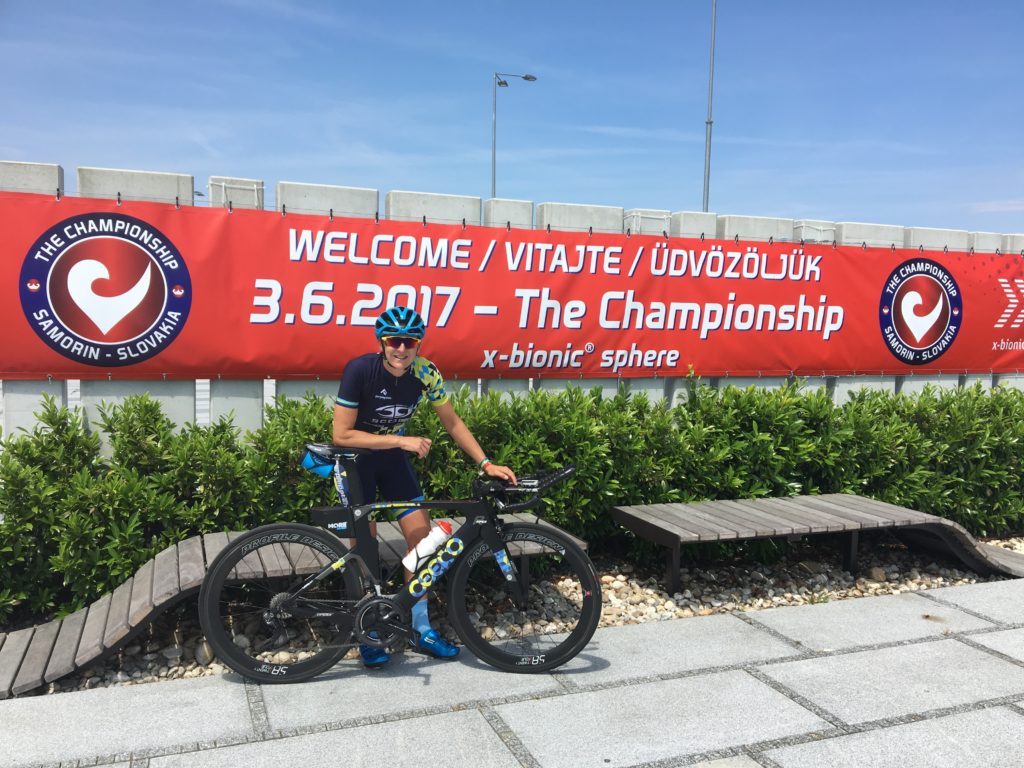 The Championship, a fabulous event by Challenge Family

The Championship, was a really fantastic event, with a great field on the start line, and a fantastic location. The X-bionic Sphere is a multisport complex with one of the best equestrian centers in the world, as well as a 400m and 200m track, 50m outdoor pool and 25m indoor pool. Tracks and trails on the Danube for running and riding, three floors of gym as well as much more. There are also four restaurants and two bars on site. It meant it was really easy logistically for a race as the whole race site (start, transition, and the finish) were all just minutes from our accommodation. Added to that a very civilized 9am start time and it was all smiles. They also implemented the 20m draft rule for everyone, and the whole event had live coverage which was fantastic and a big thank you and hats off to Challenge Family for this.

Unfortunately my race wasn’t too sparkling, and I was flat and couldn’t really get out of third 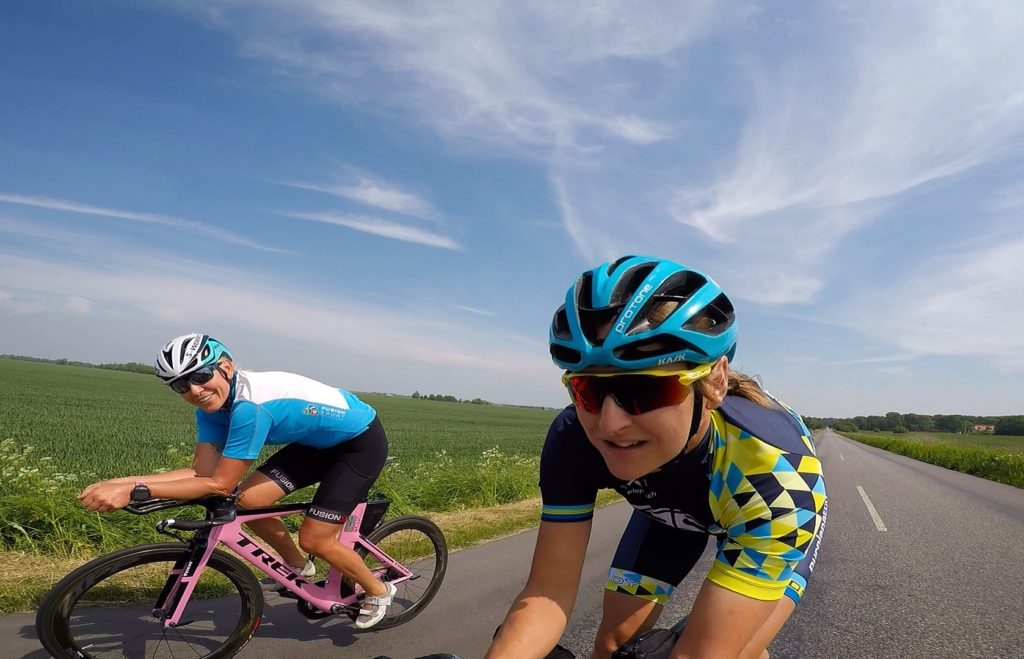 Lucky to meet so many friends around the world through this sport!

gear all day which was disappointing for a big race, you just want to perform and have a decent at least day. Likely the travel and disruption and a few others things affected me more than I probably acknowledged. Even though Matt and I had chatted about what my body may or may not give me considering the lead up, I probably didn’t manage and process this as I should have done.

Moving onto Denmark and for whatever reason I was in a completely different headspace. It’s hard to explain, but where as in Samorin, my head was filled with too many negatives that I struggled to control, once in Denmark I was able to manage and deal with thoughts in a much more proactive and positive way. It was completely different. One thing that is fantastic about this sport is the people and friends I’ve met along the way through racing, training and travel. One of these is Anne Jensen, and so I was able to spend a couple of days with Anne in her home in Denmark before heading to Herning for the race. Anne is a Pro too, but can’t do enough for other people, incredible self less and going out of her way to help. For instance she lied when she told me she only lived 30minutes from the airport and would pick me up, when in fact the 30minutes was more like 90minutes to 2hours, but she wouldn’t have any of it! Thank you Anne! 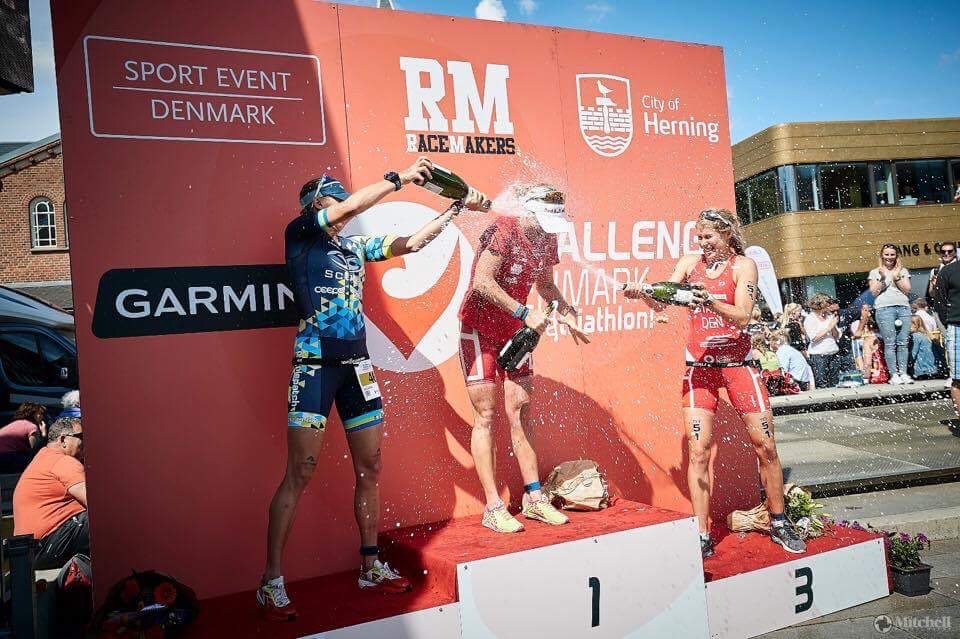 Herning was a great race and such a fun course. A big one loop bike over the rolling Danish country side, and a four lap run course right through the centre of the town. I mean zig zagging through the streets, spiraling up and over a pedestrian foot bridge and then running through the library. I mean, yes right through the middle of the library, inside the building. The four laps meant the crowd support and energy was fantastic a real buzz and they had some great Euro Pop tunes pumping at the finish line! Again live coverage for the race! Thank you Challenge! 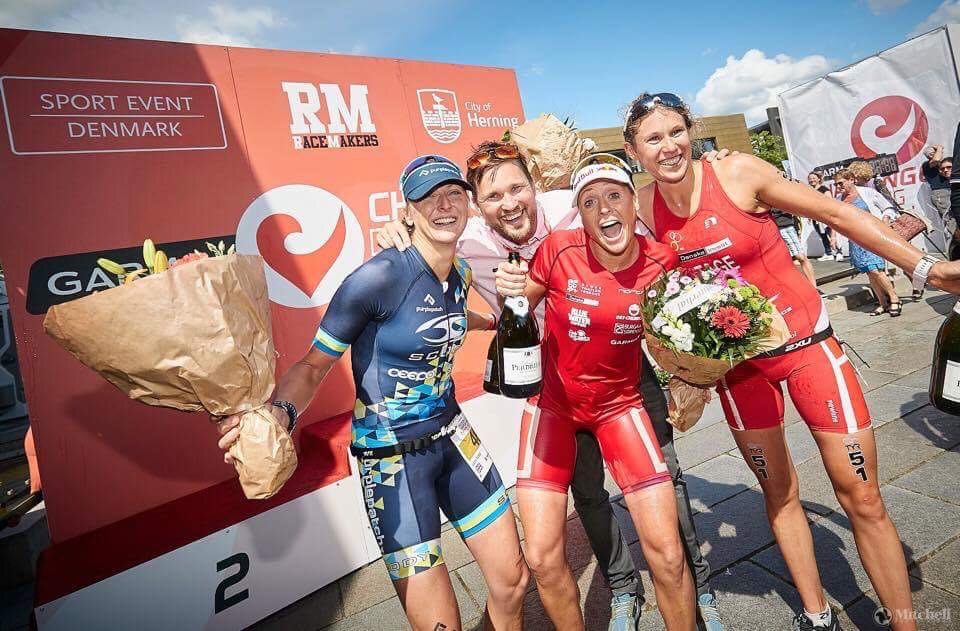 Performance wise I was back to my favourite position of 2nd, but very happy to be back on the podium. Again the swim is letting me down as I’m giving away too much time to the front. But I put in a decent bike to move up and come into T2 in 5th, and was then able to run my way into 2nd. It was 2nd on the day and I was happy with that and being back on the podium. As always a lot to work on if I want to really be competitive at the top.

I can definitely recommend Challenge Herning for a great fun race in 2018 as well as telling everyone they should definitely try to qualify for The Championship too! Such great races by Challenge Family.

So there we go. A bit of a long update with a fair few things covered. 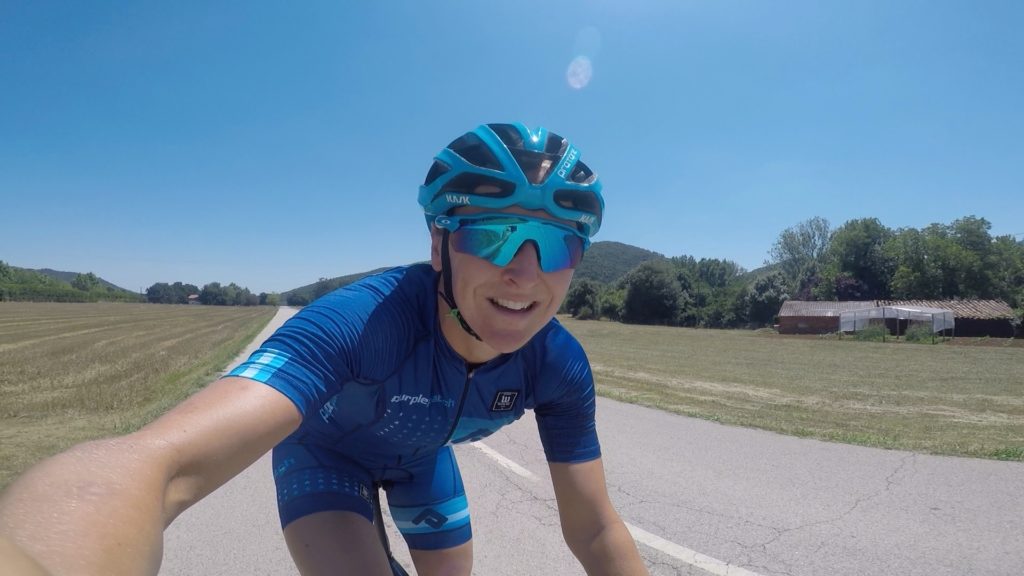 All smiles when riding here in Girona

I’m now in my last few days in Girona, it’s gone so quickly and I head to Germany, with Challenge Roth looming fast. I can’t believe it’s here, and come around so quickly. I’m really excited to get to Roth, it is simple one of the best races in the world (I do have a soft spot for Challenge Wanaka). It’s incredible, and everyone should try to get to Roth to race once (be in a team or individual) or just go and support and soak up the incredible atmosphere. It’s really something else. I can’t believe I’m racing a full again in just over a week. It’s a pretty scary prospect at the moment but nerves and being a little scared is good I feel.

Thank you to all my sponsors and supporters who are helping to make this incredible journey happen!

For lots of lovely discounts, please check out the Sponsors and Supporters pages on my website and shop away! Thank you!