Actually I think I let out an agonising yell on the count of 1, the point at which Meredith Kessler, crossed the line, raising the winners tape, and I stepped onto the finish carpet realising I wasn’t going to be able to capitalise on the opportunity. Getting so close to the win, but so far at the same time! 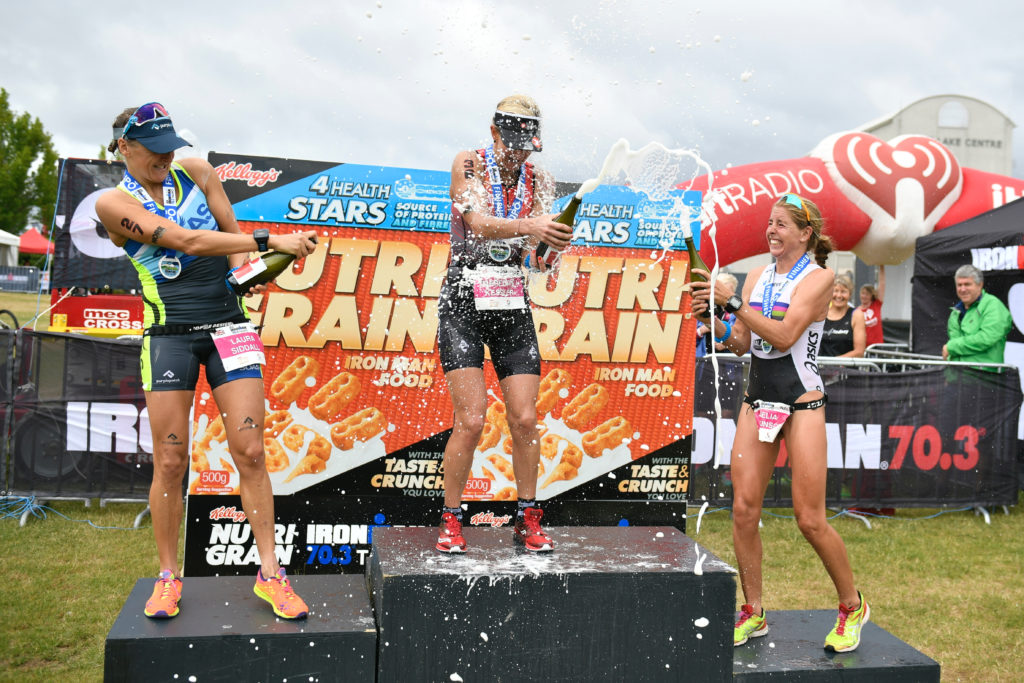 I’d run out of road, having been closing the gap to MBK over the run, I’d just run out of distance to haul her in. However, knowing MBK, if there had been another 20m or 2km I know she would have fought to the end and made it hard for me to catch her and pass her. 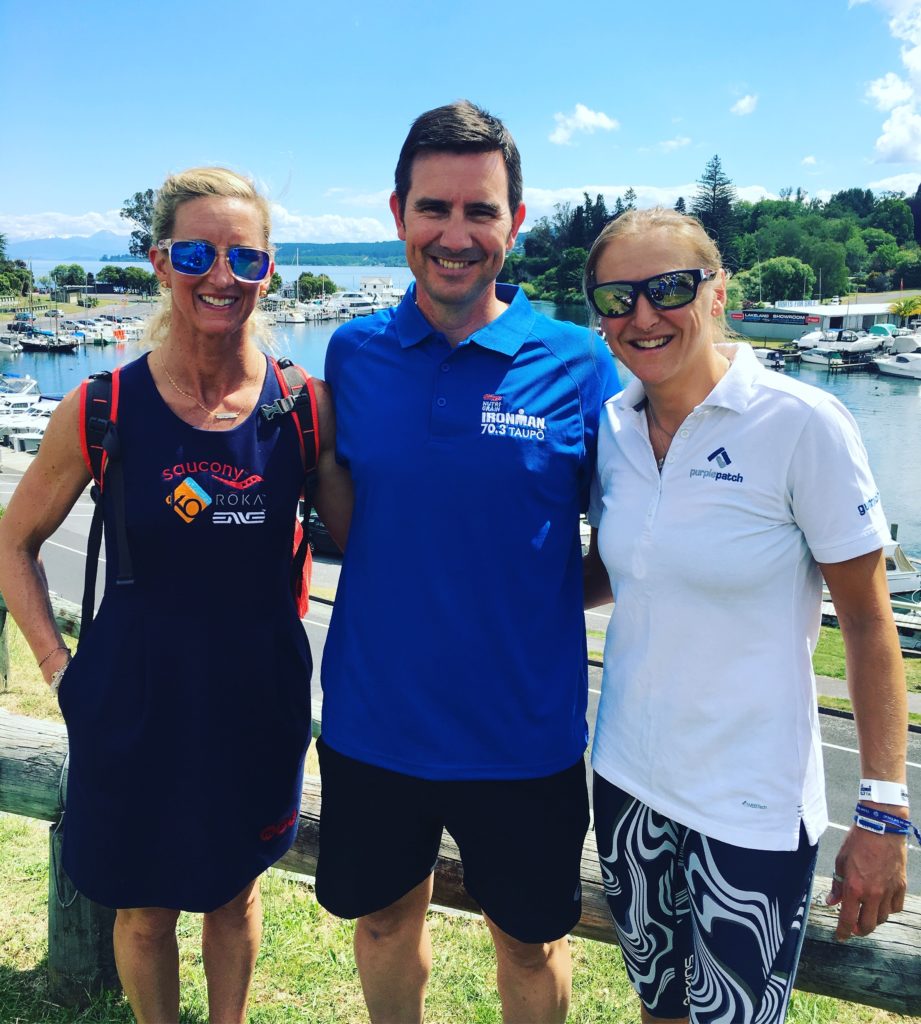 Funnily, the day prior we’d both been interviewed on Facebook Live by Cam Harper and the Ironman 70.3 Taupo team. Cam had mentioned a sprint finish and we’d been joking about it. In all likelihood, none of us really thinking it would come down to that.

Even as I ran out of T2, starting my run, knowing I was about 4minutes down from the lead (not knowing who that was as both MBK and Amelia Watkinson were ahead of me), I shouted to Cam, “I’m going after that sprint finish” but was still kinda joking about it. At that point I had no idea I’d get so close to it actually coming true. Well I held up my end of the bargain, I was sprinting down the finish chute, sadly MBK didn’t wait for me to fully enact the sprint, holding me off and finishing that 8seconds ahead. 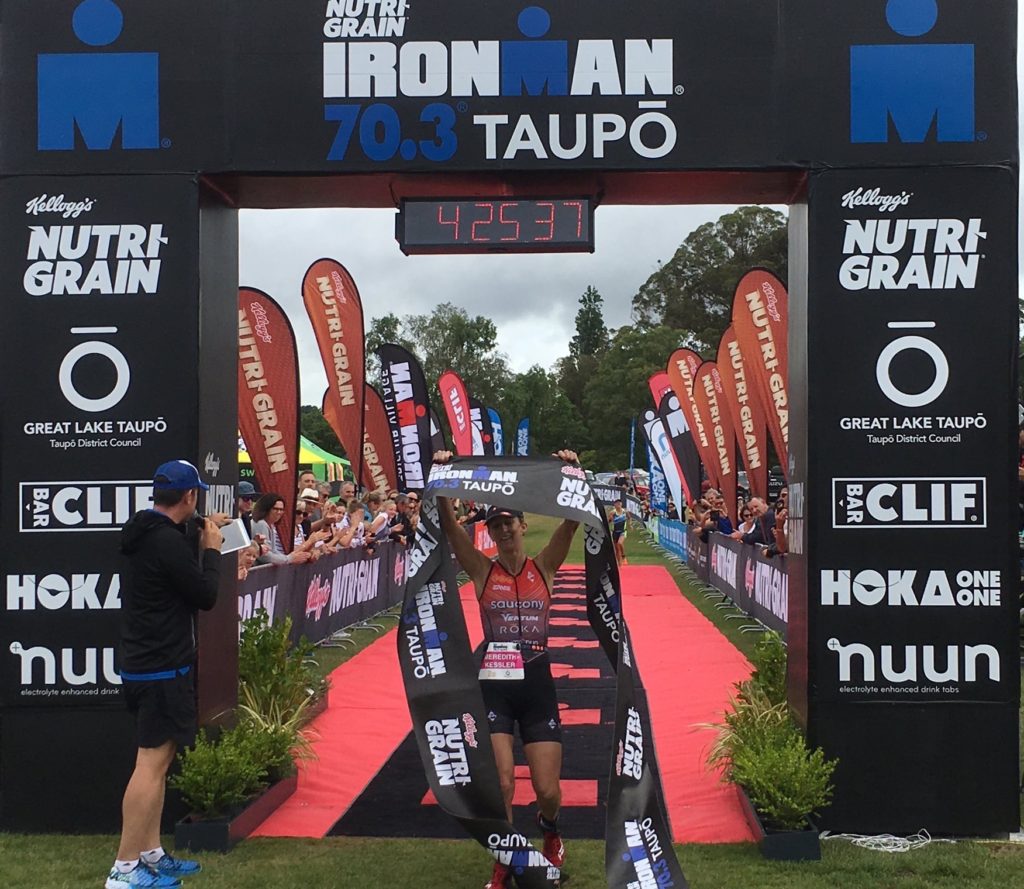 8seconds of motivation!
Just stepping on to the carpet as MBK finishes. (cred. Darryl Carey)

Will that 8seconds haunt me. Hell yes! To come so close. To see the door of opportunity open, but to miss out. Have I gone back over the race and thought of all the places those 8seconds could have come from. Hell yes! For a starters if I’d have had a better swim and bike that would have helped. Even on the run you go back and think could I have pushed it earlier? Did I really run hard enough?

But those 8seconds will motivate me! I’ll use them to create the determination and drive over the coming months as I prepare for 2017.

Race morning was surprisingly warm and dry, compared to the weather forecasts leading up to the race. We were met with a flat, calm and crystal clear Lake Taupo! It really is stunning. Sure it was fresh but it’s just pretty magic on race morning. Within moments of the starter gun, I found myself in no mans land. Well that wasn’t quite the plan. The other women had gone so fast off the start I’d not even had chance to try to find feet which had been the plan, and already before I really got swimming was left watching the splash disappear ahead. So once again it was a solo swim for me. Part of this means I can just focus on my stroke and rhythm, which can be a bonus, but it would be nice to be able to do that whilst sitting in a pack. 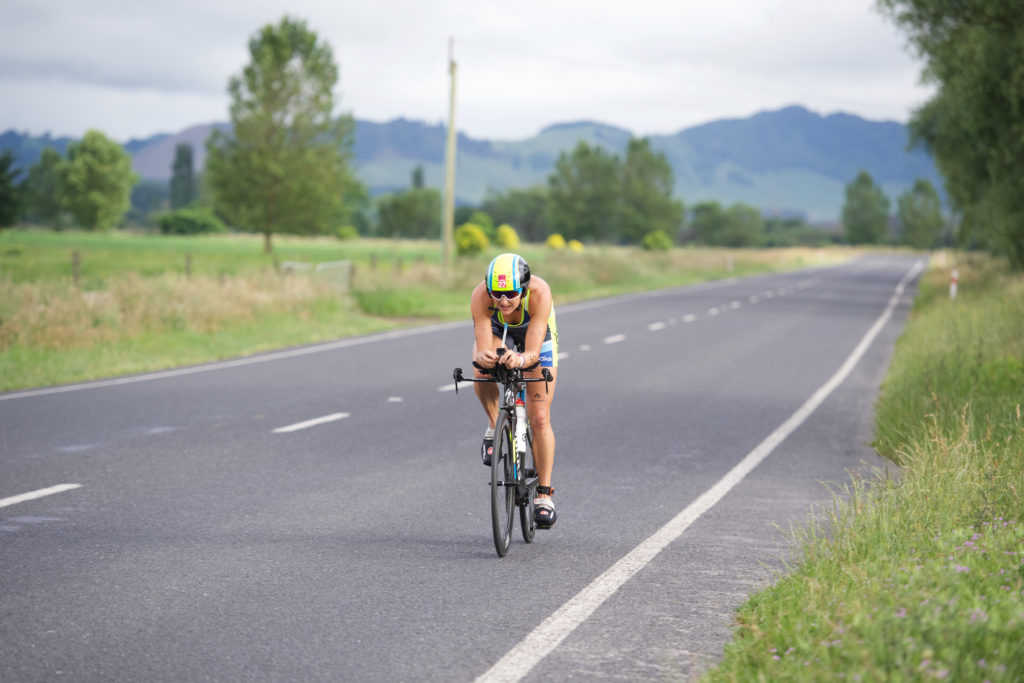 Coming out of the swim, there’s about a 400m (pretty sure it’s actually more than that) run to T1. I hoped I’d be able to make up some time on the run section before heading out onto the bike and was told I was about 4, 4.5+minutes down from the lead. The bike being and out and back course, means that you only get one chance to see the leaders, when you get to the turnaround at the far end. As I approached MBK was heading back to town, Amelia Watkinson with her. I tried to judge time and worked out I was roughly still about 4minutes behind them. I’d over taken some of the other women in the race on the way to the turnaround putting me in 4th position. Melanie McQuaid was in 3rd and not to far up the road. I’d struggled to find a bit of rhythm on the first half of the bike, but still felt reasonable good and in a good head space, but in hindsight wasn’t really powering and moving how I should have been. I rode the second half better though, making good speed, passing Mel not too long after the turnaround, and setting my sights on hopefully closing the deficit to Amelia and MBK. In the end we all pretty much rode the same time, give or take 5seconds. 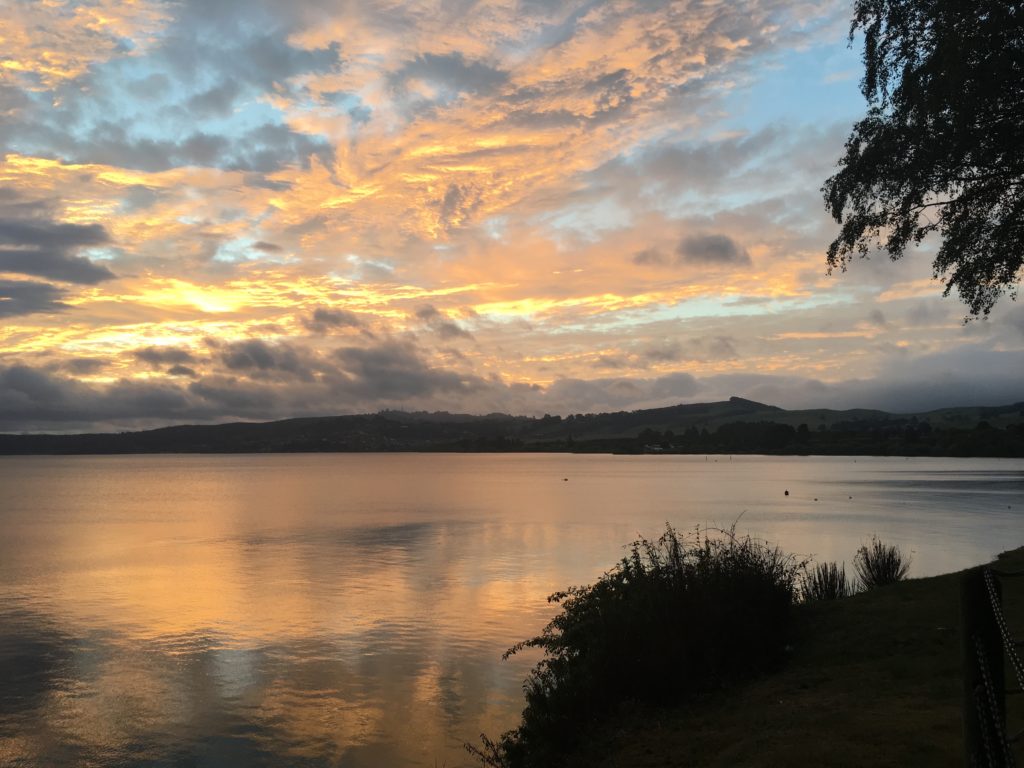 The run is two loops along the shores of Lake Taupo. It gives you quite a lot of opportunity to see the other runners ahead, with some longish straight sections where you can gain good sight. But mainly it’s at each end at the turnaround where you can really gauge were you were.

I was quite surprised when, as I approached the first turnaround at ~5.5km, I saw MBK coming the other way with the lead bike, solo. I’d fully expected Amelia to be with her. It was then that I realized the orange vested official on the bike, some 200-300m on the road ahead of me, was actually the 2nd place bike, and was Amelia. It was funny when I’d first spotted the orange vest, I’d wondered why there was an official riding next to two pro men. I’d assumed they were pro men and perhaps one wasn’t very well and so the official was keeping an eye on him. Yes the bizarre things that go through your head! But it now transpired and as I got much closer I could make out that it was actually Amelia with the second placed biker, running next to a Pro male, and I was approaching pretty quickly. I passed Amelia on the return to T2, possible about the 6 or 7km mark, and quickly kept my focus forward, only dealing with Amelia again if she re over took me. Coming to the end of lap 1, I was getting splits that I’d taken perhaps 1minute out of the lead to MBK, and was 3.15mins behind now. Ok so another 1minute on lap 2 and I’ll be about 2minutes behind at the end. Not bad and pretty close but no anything amazing either. However I dismissed these thoughts and just kept trying to keep form and a relaxed rhythm, moving forward strongly. I knew I had to use the tail wind on the way out as much as possible so keeping the body relaxed and tapping away. 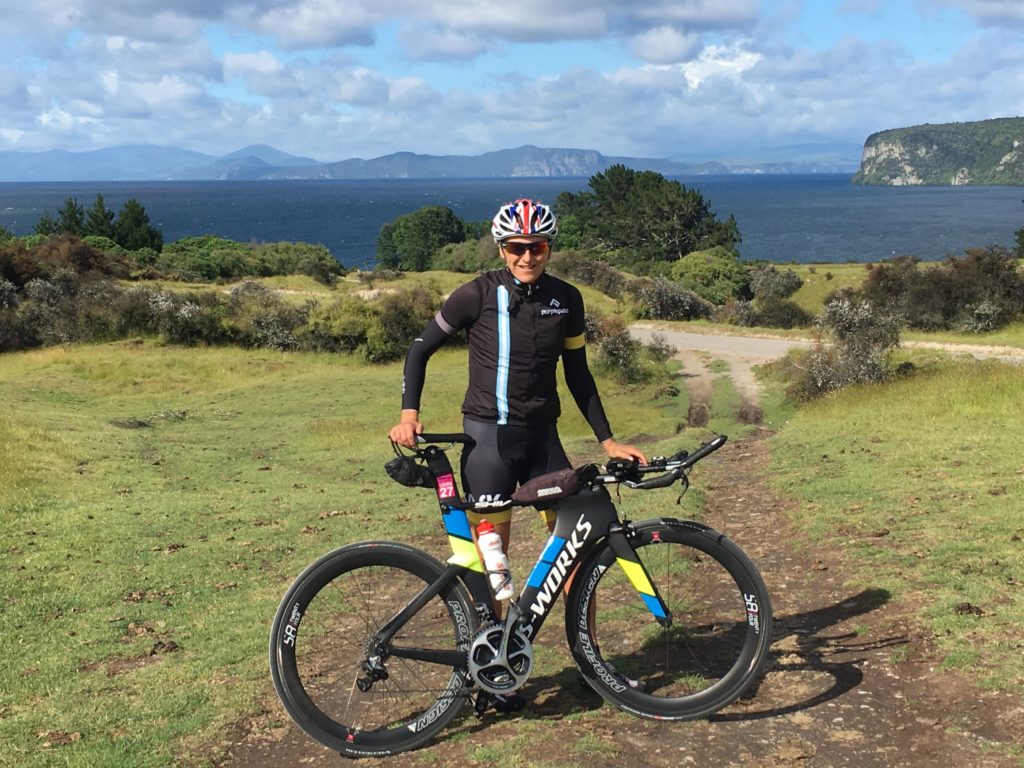 At the far turnaround on the second lap I knew I’d taken some more time out of the lead, and felt I could close down more, but again it wasn’t likely to be enough. Once we got onto the lake front, the path weaves in and out of the shoreline, but it gives a good sighting across to where I could see the orange vest of the lead bike, again it was much closer. I knew at this point it was probably going to be my best opportunity, the door was opening…. But was there enough time or distance left. It seemed like I was going to run out, but I had to give it a shot. I knew I just had to keep pushing along strongly and trying to keep my form and just running well. As we got back into town I could see the bike not that far ahead and was now suddenly causing a stir in the crowd and I was receiving splits of 40seconds to the lead. But I was running out of road. The last km of the run, goes down a slight hill, and then along the marina before kicking up a hill back to transition and the finish. It was getting close, both me gaining on MBK, but so too was the finish. 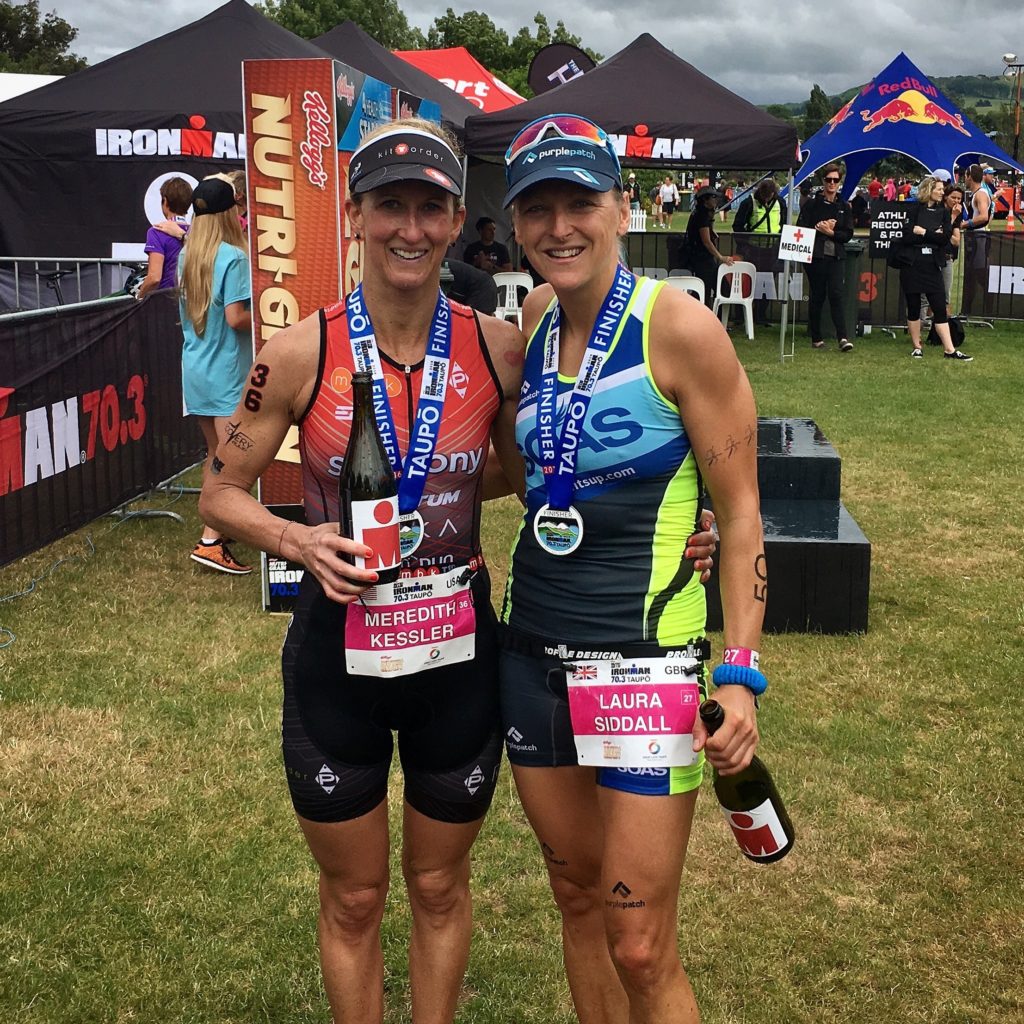 Why couldn’t she just wait for me so we could really have a proper sprint finish down the chute! Ha ha! Yes that did actually go through my mind!

As MBK turned off the road onto the grass to the finish, she looked back, and did, I think, a double take when she realized how close I was, yet at the same time I’m pretty sure she knew she’d held me off and would take the win.

Yes if I’d swam faster and biked faster (and to my ability) the 8seconds would have been easy, but also the race dynamics would have changed and who knows what would have happened.

So I now have 8 seconds of motivation to push me into 2017 and onwards!

8 seconds and 8 moments of Taupo 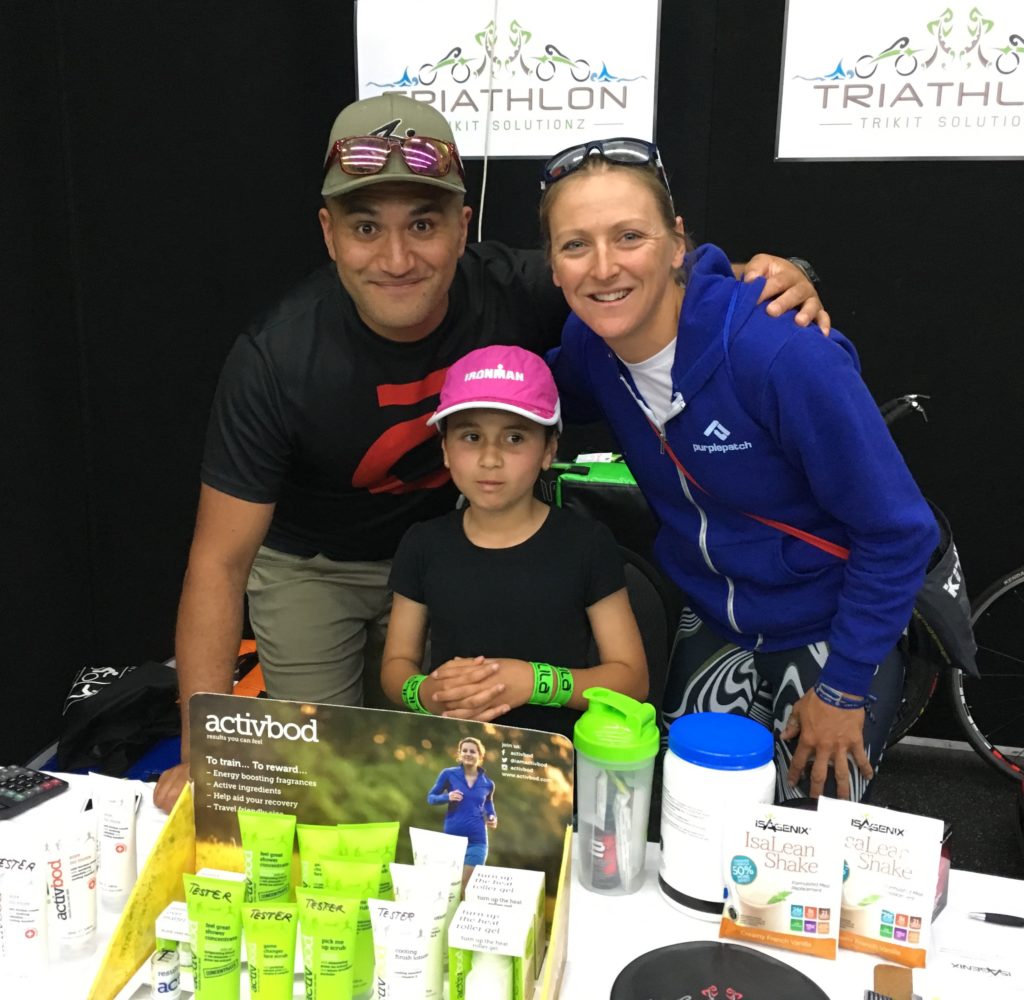 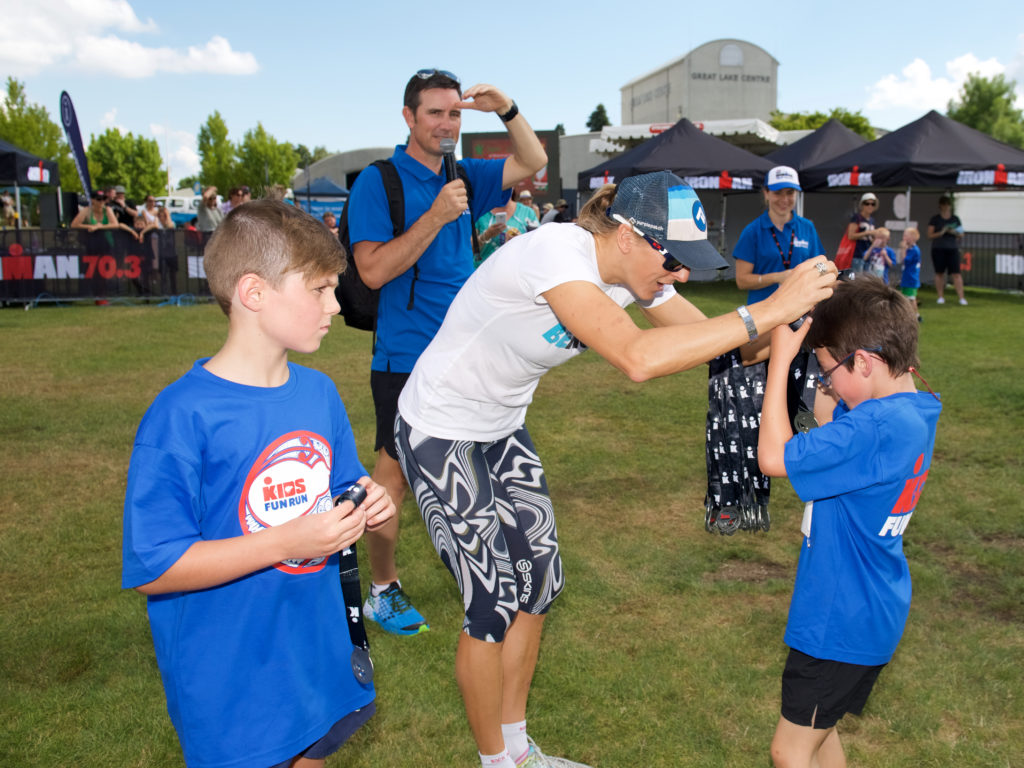 Iron kids runs – such good fun. These kids have so much energy and full of smiles! (Cred. Darryl Carey) 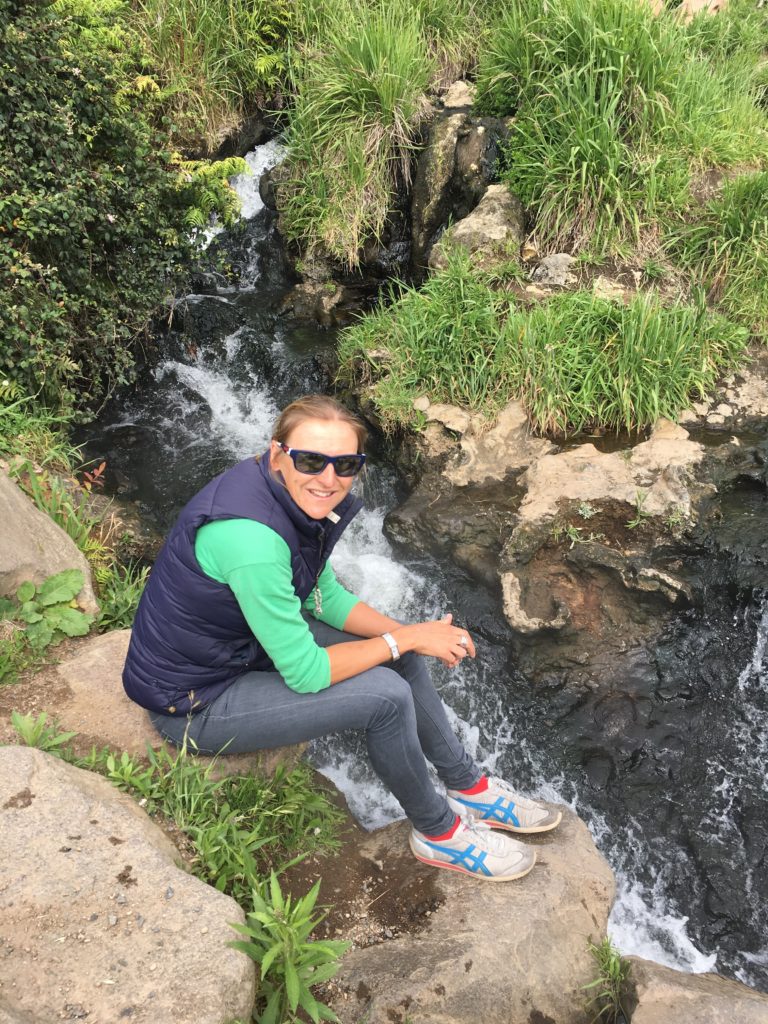 Hot springs in Taupo! Definitely wearing too many clothes at this point!

Do MORE… MORE Than Sport in Langkawi